If you are after a summer break, then you can’t really get better than a holiday to one of the Greek Islands. But with  so many islands to choose from, which will suit you or your family the best? This guide will help you to decide which Greek island is the one for you.

Which Greek Island Is The One For You? 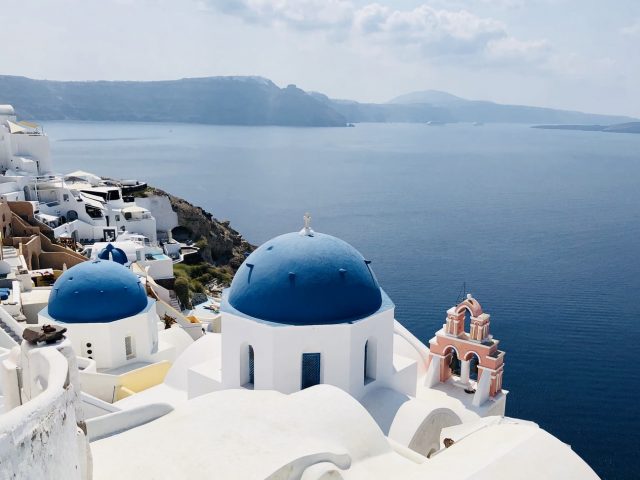 Whether you are looking for a romantic, quiet or secluded getaway, to a riotous clubbing adventure, the greek islands cater for all tastes and budgets.

But some of the islands are definitely quieter, some are more family friendly. They are also grouped into several island ‘families’ that share similar cultures, climate and history.

No matter which one you do choose, I would certainly consider taking a look over at the Voyage Price website. They have some great offers on all inclusive getaways right now. So which Greek island is the one for you? Here are a few pointers.

Crete is the largest of the Greek islands. And as such it really does have something for everyone. The majority of tourist resorts are on the North of the island, but if you travel into the south of the island there are plenty of mountainous areas to explore and amazing scenery.

For party central, Malia is the place to be. Or nearby Hersonissos is also a busy resort full of clubs and bars. For a more family centred holiday, Chania to the west of the island has some wonderful family hotels. And for the ultimate quiet and romantic resort, I would recommend Elounda bay. Though there are plenty of chic and boutique couples only hotels in every resort.

From the supposed birthplace of Zeus to a leper colony near Elounda, there are so many historic and ancient sites to visit on the island too. The Venetians have a long history on Crete, and you can still see evidence of their ruling the island in the 14th century Venetian harbour at Chania.

But Crete’s showstopper has to be the ancient city of Knossos, which is just outside the capital Heraklion. This was an ancient settlement in the time of the Minoans. And where the myth of the Minotaur was born. 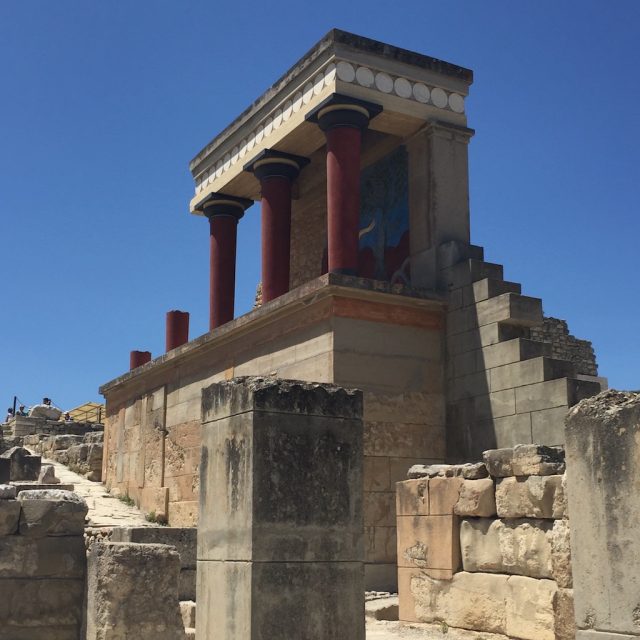 The Cyclades are probably the most classically ‘Greek’ islands. The ones you think of when you think of those picture postcard views, with their blue domed churches, white washed houses and mountainous scenery.

Is definitely the poster boy of the Greek islands. With its steep steps and darker sands, it really is a picturesque island to visit.

It is an incredibly romantic island. But it probably isn’t the most family friendly. And it definitely isn’t the island to visit if you have mobility issues.

Instead it gets the prize for being the most sophisticated and chic of the Cyclades islands, with fine dining and shopping to die for.

Is definitely a close second to Santorini for chicness, though. Definitely more of a wild party island, Mykonos town itself is the place to be at night. And some of the beaches have a wonderful club vibe throughout the day.

There are quieter places to stay on Mykonos though. And the island is quite small for getting around by taxi or when hiring a car. 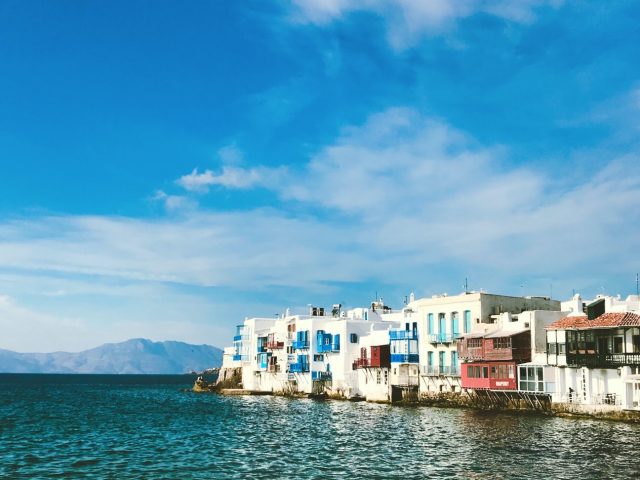 Some of the other islands in the Cyclades:

Closer to Turkey, these islands all have traces of both Greek and Turkish cultures on their soil. And you can often take a day trip to Turkey from their main ports.

The largest of the Dodecanese, Rhodes caters for all. With a mixture of family, couples only and party resorts, you will be able to find all that you need.

Plus there is a wealth of history and culture to be discovered one the island, from the Acropolis at Lindos to the 14th Century old Rhodes Town itself. Sadly, not much remains of the Colossus statue that was one of the 7 wonders of the ancient world. But there are still plenty of archeological sites to discover. 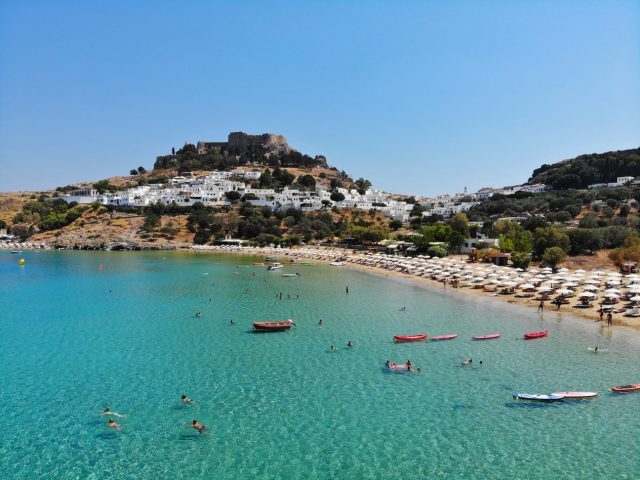 Is also known for its many archeological sites. Rich with Greek and Roman sites, the main port of Kos Town has a wonderful 15th century castle.

Again, there are plenty of resorts to suit all families and budgets.

Other Islands In The Dodecanese Include

Both of these are small islands with smaller tourist resorts. But from Samos you can take a day trip over to Ephesus in Turkey, which is definitely worth a visit.

The Ionian islands sit on the western coast of Greece. And are perfect if you do not like it too windy. These islands were part of the Venetian empire and so have a much more Italian flavour.

Is the largest of the Ionian islands. And again has something for all. Plenty of history in the form of its Venetian architecture, and Corfu Town is a World Heritage Site.

Is famous for being the picturesque setting for the book “Captain Corelli’s Mandolin”. It is a pretty island with some of the most beautiful beaches of all the islands. So makes the perfect setting for a romantic holiday.

Is one of the newer Greek islands to emerge as a holiday destination, with its pretty coves and bays with long sandy beaches. 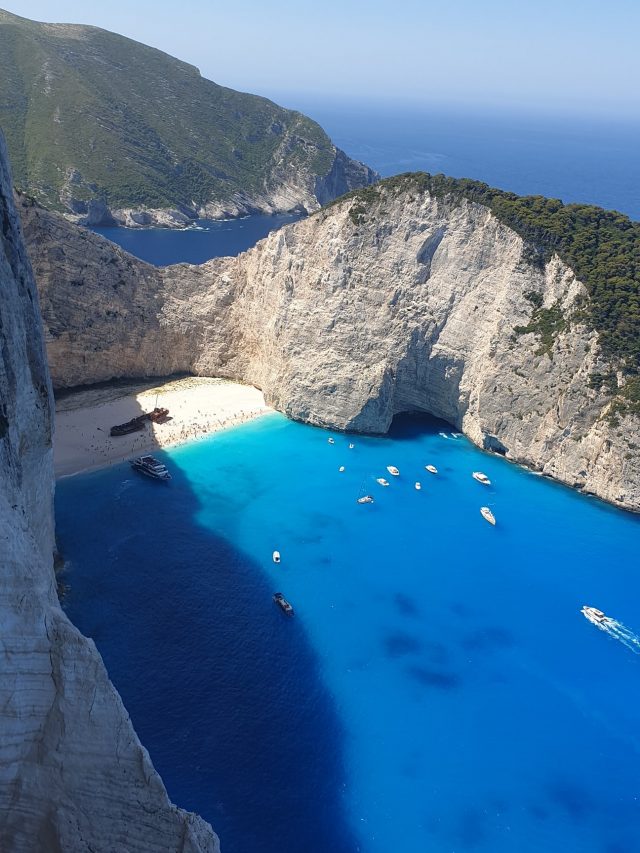 Other Ionian Islands Include:

The Sporades are the islands in the Aegean closest to the north east of the Greek mainland.

Is the island where ‘Mamma Mia” was filmed. The seas are calm, the island green and lush, and the houses have red roof tiles and pretty wooden balconies. It has some gorgeous beaches, and is good for couples and families alike.

Other Islands In the Sporades Include

Skopelos, Skyros and Alonnissos. All are very quiet in comparison with their more famous neighbour.

Finally, the Argo-Saronic Islands are the closest islands to Athens. And are thus regarded as the Hamptons of the Greek islands. In fact, most of the elite and wealthiest Athenians have their summer homes and villas here. And as such this is are all very chic and luxurious islands. And perfect for visiting the mainland, especially Athens, during your stay.

Are all islands in this group. Hydra is quite a bohemian island, popular with artists and wealthy Athenians alike. Spetses, is far more exclusive. Yet the beaches are not that brilliant. But perfect for people spotting and shopping for luxuries.

At the end of the day I hope that this article has helped you decide which Greek island is the one for you. Which one did you choose?

3 Replies to “Which Greek Island Is The One For You?”