This week marked a big anniversary in our house. Not of a birthday, nor a family celebration. But the anniversary of the day last year when our little girl broke her leg. She was 17 months old. How do you cope when a toddler has a broken leg?

How Do You Cope When A Toddler Has A Broken Leg?

We were on holiday on the Yorkshire coast when it happened. We’d had a lovely day, had been down to the sea front and eaten some gorgeous fish and chips. The weather was great, it was the last week of my partner’s school holidays before the new term began.

It all happened so quickly. I was washing up whilst Andrew took Elizabeth and her ball out to play. He was carrying her down 3 steps with the ball in her hands. And then I heard a massive scream.

Elizabeth was inconsolable. But as she wasn’t really talking more than a few words at this age she couldn’t tell us what was wrong. She was just really crying, much more than she usually would. And wanting picking up. Andrew said that she had dropped the ball whilst they were going down the steps. She had tried to wriggle out of his arms to get the ball and he had almost dropped her. But he had caught her just before she hit the ground. We thought that she had just had a bit of a shock.

But 5 minutes later she was still crying. A moaning little cry that we had never encountered before. This wasn’t right, I thought. Andrew put her down.

And she couldn’t stand up.

She stood for a second, shaking, then cried and sat down.

We looked at each other. “Has she broken something?”. We felt over her legs as she sat. When we got to just above her left ankle, she gave an ear piercing scream. We needed to get to hospital.

Bridlington has a very small hospital on the outskirts, so that was where we took the car. They did a brilliant job, we were seen and treated really quickly. Elizabeth’s leg was x-rayed, and a hairline fracture was found. They placed a temporary pot, and we were advised to go to our local hospital when we got home. We were told that she wasn’t allowed to put any weight on the temporary pot.

We decided to cut our holiday short and packed for home as soon as we got back to where we were staying. 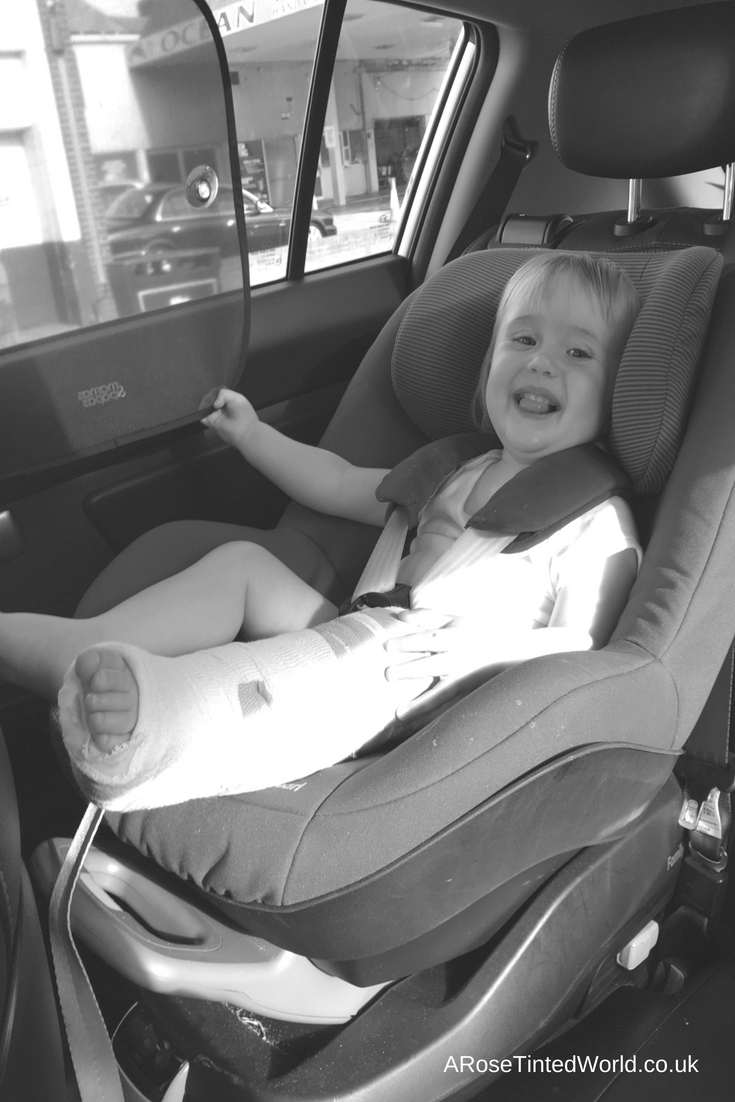 The next day we visited our local hospital and were seen in children’s A&E. They didn’t change the pot straight away, but we were put on the orthopaedic clinic list. I was a bit distraught, as this meant that Elizabeth was going to have the temporary pot on for longer than I had thought. HOW was I going to keep her from standing up and trying to walk around, as she really was too young to understand?

She didn’t actually try to walk with the temporary pot as it turned out. Maybe it did hurt a little, which prevented her trying. We had to do some emergency remodelling of her high chair and cut the legs off some of her sleep suits, to make room for the bulky pot. Luckily it was summer, so she didn’t have a cold foot. 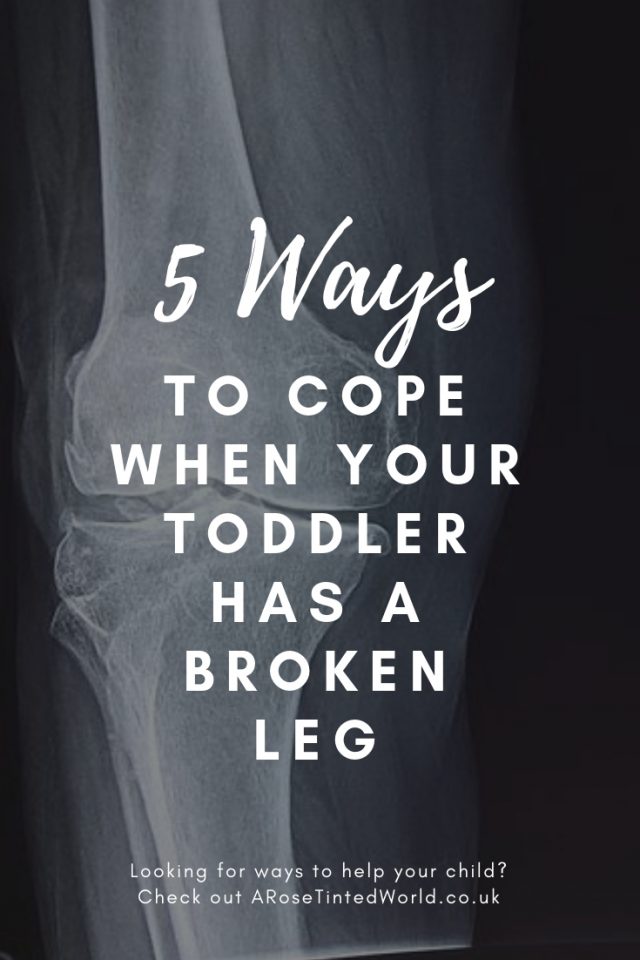 Thankfully we were seen a few days later for the real pot putting on. We got to choose a colour, she chose red. She did not mind at all having the pot placed. And we were told that she could stand on the real pot, but not put too much walking pressure on it. Also thankfully, once the real pot was on Elizabeth could go to nursery. When a toddler has a broken leg, nursery won’t allow them to go with a temporary pot.

Well, I needn’t have worried, the real pot was no barrier to her doing most of what she had been doing before the accident. She could walk and even tried to dance with the pot on. We tried to keep her sitting down, but have you ever tried to keep a toddler still? In her favourite room we kept her toys in a circle all around her, but she still did as much as she could. Also, we relaxed our limits on the amount of films and television that we would normally allow.

Bathing, or lack thereof was a pain. We managed with flannel baths. We never even tried to bath or shower with a bag over the pot as it would have got wet.

Getting the Cast Off

So, we couldn’t wait for the pot to come off. We had been warned that it may take her time to get used to walking on the leg again. The consultant warned us that she might not want to put much pressure on the leg for a week or two.

She had the cast on for just over 4 weeks.

She really cried at the noise of having the pot taken off. But was really happy to see her leg. She was back up and walking that day like nothing had happened. Didn’t even limp or act like there had been a cast on there. The leg was a bit pale, but otherwise looked no different. Having heard stories of legs looking thinner I was so relieved.

And a couple of years on she has forgotten all about the whole experience. We haven’t though.

My 5 Tips When a Toddler Has a Broken Leg

I hope that this post has helped you to know what to do when a toddler has a broken leg. I would love to hear your stories. Do post them in the comments, or contact me on social media.

Enjoyed this post. Why not read how our little one also has had to cope with Sleep Apnoea

Or how I became an older mum in the first place, Pregnant at 43 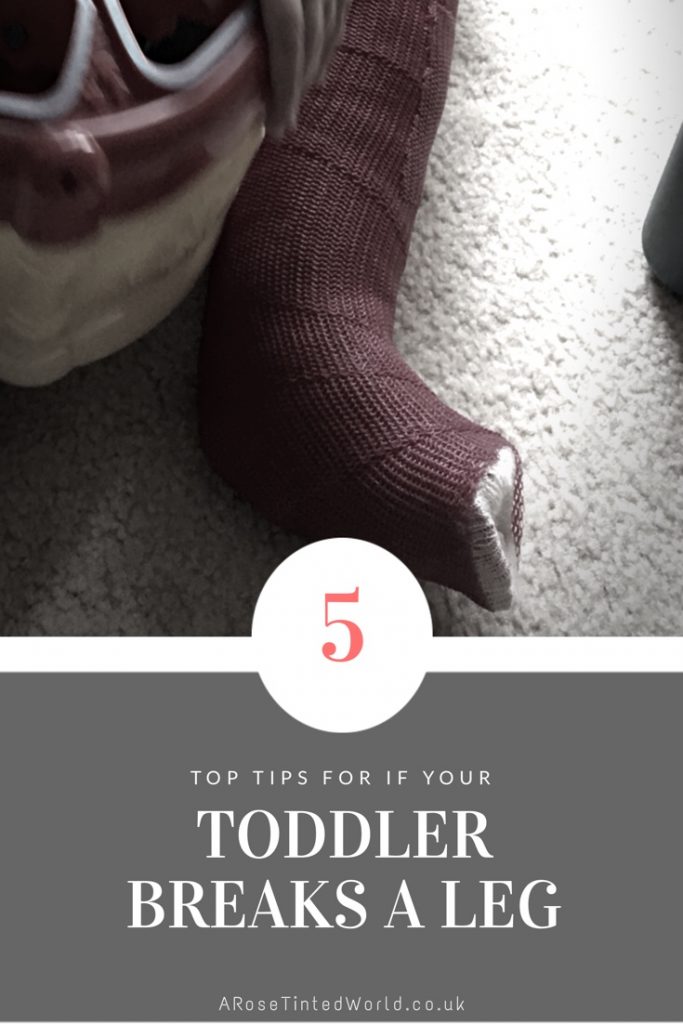 16 Replies to “When a Toddler has a Broken Leg”