The Benefits Of A Tonsillectomy In Children 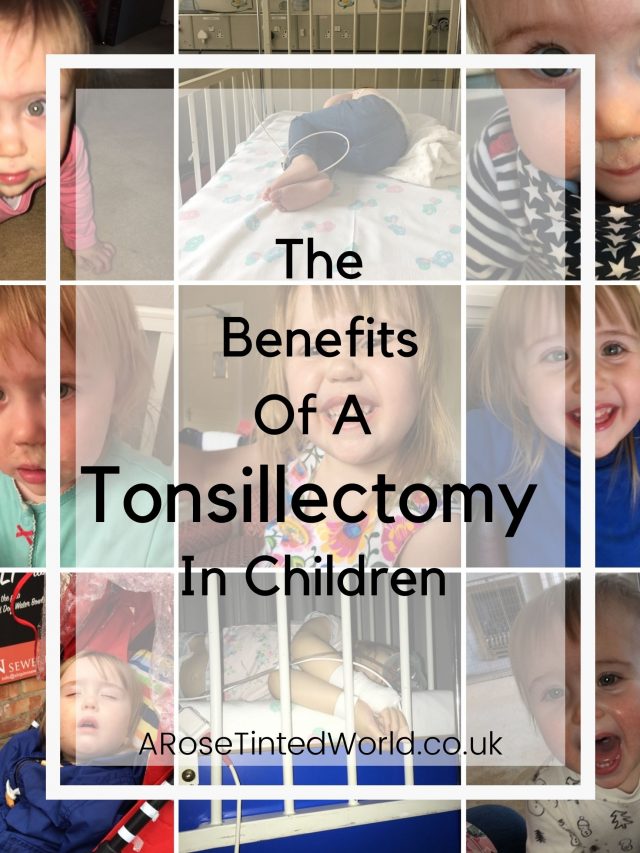 Electing to have your child’s tonsils and/or adenoids removed is a big decision. Any elective surgery is a choice, and carries risks. Will it improve their health? Is it worth undertaking? Will their tonsils decrease in size over time?

Our little girl had her tonsils and adenoids out when she was 2 and a half years old, and this is what we have discovered from her having this done.

Does It Need To Be Done?

Sometimes, a child can grow out of needing to have tonsils removed. Sometimes, the tonsillar tissue decreases in size again and so an operation ceases to be needed. It is certainly worth you asking your healthcare provider if this could happen in your case.

However, in our case, our little girl was not yet 3 and her tonsils were just becoming more of an issue. She made a lot of noise when she breathed, even at rest. The consultant even pointed out that she probably just could not breathe through her nose at all! An operation really was the only option.

Once her tonsils and adenoids were removed the surgeon said that her adenoids in particular were incredibly enlarged. They filled 3/4 of the back of her nasal cavity. No wonder she was having issues, as they probably flopped and obstructed her upper airway as she laid down. And they probably got even bigger when she caught an infection, which seemed to be pretty much 100% of the time!

But what improvements did we see after the surgery? Here are some of the main effects we saw. Some came straight away, and most were seen within the first few months.

Before her operation, Elizabeth had suffered for 18 months with sleep apnoea. This meant that she wasn’t really breathing properly.

Her breathing through her mouth on a night got quicker when she got a cold, going up to 50 breaths a minute on some occasions.You could hear her snorting and struggling to breathe from outside her bedroom. Her snoring was louder than her Daddy’s. (which is saying something!)

Now she is at a more normal 22 breaths a minute. And the apnoea has totally gone. We can hardly hear her, and so I’ve gone into her room on a few occasions just to watch her sleeping peacefully.

Even when she does have a full cold and blocked up nose, she never snores and struggles to breath like she did before her operation. Goodbye tiny Darth Vader.

Less Chance Of Her Having Ear Infections

Excess tonsillar tissue tends to block the eustachian tubes at the back of the nose and throat. These tubes lead to the middle ear and so when they are blocked there is a higher risk of ear infections and complications.

Luckily, Elizabeth hadn’t really seemed to suffer with her ears much, but I know from personal experience how painful chronic ear pains can be. By having her tonsils removed the risks of long term ear problems has been reduced.

Do you have ear problems? Auris Ear Care could help with specialist earwax removal.

We Don’t Have To Sleep Next To Her Any Longer

We do not need to do this any more, and can instead sleep in our own bed and get a more restful sleep. This has certainly helped our sanity.

There is no more sleeping on a slant

Before the op, we used to have to put pillows under one end of Elizabeth’s mattress to keep her sleeping on an incline. She even got used to pulling herself up this incline in her sleep! We didn’t like to give her a duvet as we felt she was already struggling getting air.

Now the pillows under the mattress have gone, and she can sleep on a flat bed with a pillow and a duvet like a normal child. 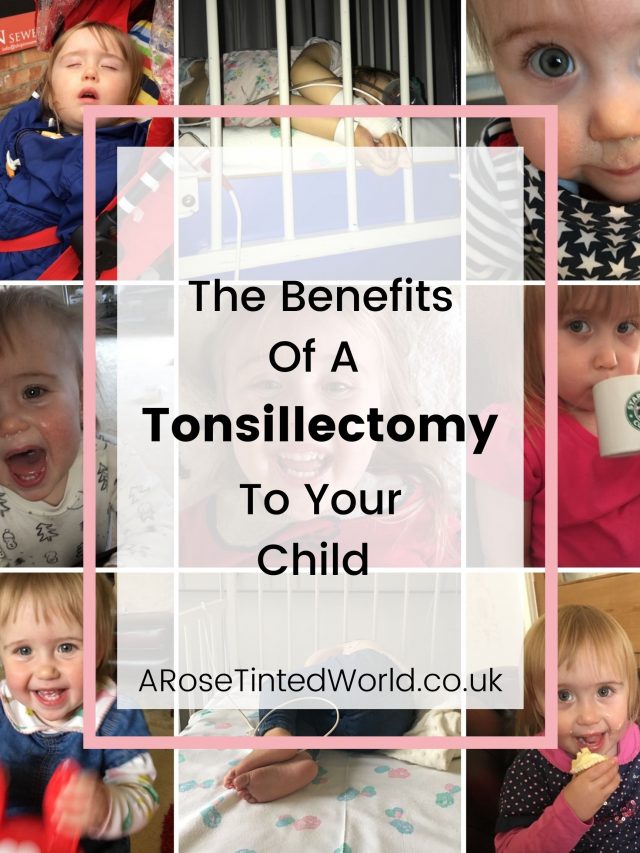 Her sleep is SO much improved

Before the adenoids and tonsils were removed she used to wake herself up a lot in the evening and through the night, gasping for breath. Now she breathes so much better, so her sleep has improved greatly. And we also are able to sleep better.

This in turn has led to her temperament being so much better.

She Seems So Much Happier

Obviously she was losing so much sleep whilst she had the sleep apnoea. It made her tired and cranky.

Now she has more energy, and is getting the sleep that she needs. Whilst the apnoea didn’t seem to affect her growth, I have friends whose children have also suffered with not growing as much because they were not sleeping and not eating properly whilst suffering with apnoea.

Additionally, her appetite has definitely improved since the operation and she is eating well. Before she would just want milk and often refused food.

Now she is happier eating, probably because she feels better at being able to draw breath through her nose whilst she eats.

Talking of noses, Elizabeth had a constantly snotty face before she had her adenoids and tonsils out. We went through a lot of tissues, and she often had a sore spot around her nose and cheeks. Her nose was continually blocked.

Now, although she still occasionally has a runny nose, I think that it’s so much better. She also seems to suffer less colds, probably because she has less mucus to pick up infections with.

Her Speech Has Improved

This one has only really become more apparent as Elizabeth has got older. Back when she was a toddler, I have countless videos of her talking, and her speech sounds so very nasal and indistinct.

Now she is at school, her speech is so much clearer and distinct. For this reason alone I do think that having her adenoids and tonsils out was such a good idea.

She hasn’t had a cold – yet. At this time of year there are so many bugs going around that I am amazed she has not had anything yet. I think the constant runny blocked up nose didn’t help. In fact, I think it used to act as an ideal harbour attracting bugs into her system. No wonder she used to get everything going. Hopefully she will get a lot less bugs as we go forwards too.

We are also using a lot less calpol. Which can only be good considering she hates taking it!

Elizabeth has always been a really active girl, but I do think that being unable to breathe through her nose used to tire her out. She used to get really crabby.

Her breathing used to be really loud, even at rest. Now she bounces about so much more, and loves to run and play with her bike and scooter. Her energy levels have definitely improved with surgery.

We have less stress

Finally, I am a lot less stressed about her health.

Elizabeth’s apnoea was very stressful for us as Mum and Dad. I used to check the monitor as soon as I woke up, or even in the middle of the night. Andrew says that he also worried about it such a lot. It affected us all.

Sleep apnoea can have really negative effects on a child’s health, can lead to heart problems and development issues, so having surgery definitely means that these effects have been prevented.

Plus, we spent some much time and energy in managing and dealing with the sleep apnoea before surgery. We ended up at the hospital a few times, and even had a 5 night stay at one point as her breathing was so poor. It is so good to not have to worry about this any more.

So Overall? What are the benefits of a tonsillectomy?

So, do I think the benefits of a tonsillectomy outweigh the risks? Definitely in our case. Elizabeth is a very healthy little girl, so do fully discuss all options with your surgeon. But for us it has made all the difference. Having the surgery has totally helped with her symptoms, and helped with our sanity too.

I would love to know if you’ve seen the benefits of a tonsillectomy in your life too? Do share your story below by commenting, or find me on social media.

Enjoyed this? Why not read about how we coped when When Elizabeth had a Broken Leg

Or – still having problems after a caesarean? You could have Adhesions. 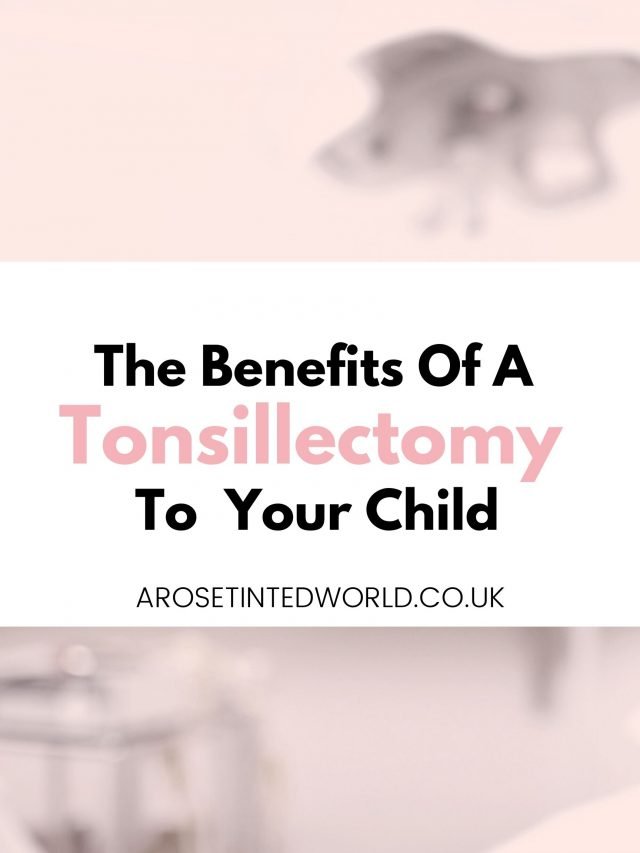 17 Replies to “The Benefits Of A Tonsillectomy”