It was never my plan to be an older Mummy. I’d always thought that I would have my children in my 30s. But life doesn’t always go the way we plan does it? And in May 2015 I found myself being pregnant at 43.
Here is how I found my pregnancy, and how I have taken to being an older mum.
*Updated – This post was first published in August 2018

Pregnant at 43 – Being an Older Mum 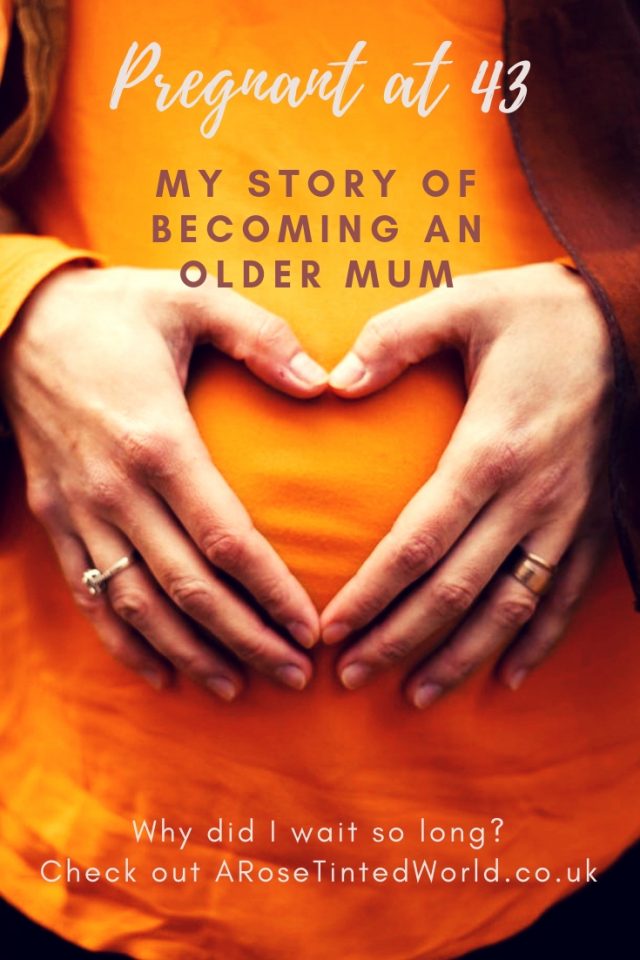 In 2014 I had practically given up on dating. I’d split up from a long term relationship in 2011 when I was 39, and spent most of 2012 going on disastrous and ridiculous dates. I’d even spent time in a toxic relationship with a psychopathic man who left me feeling lower in self esteem than I had ever felt.

I started to think that I would never meet anyone again, let alone have a family. I had always thought that I’d get married, have children. Things didn’t seem to be going according to my plans at all.
Then, in the summer of 2014 I met Andrew. It all seemed so right. We talked very seriously about our future, but I was very aware of my age and how this might be against us having a family.

Furthermore, my body seemed to be reminding me of how old I was. My periods were becoming irregular, and this worried me that at 42 I may be entering the menopause. I went to my GP who referred me to my local hospital gynaecology department.
There, the consultant basically told me that at my age I was going to struggle getting pregnant. I seem to recall that his exact words were

“Halle Berry is an exception and not the rule”

Dismayed by this sentiment, I passed on these words to Andrew. And we decided that we needed to start trying straight away for a family, even though we had only been together 6 months.

A couple of months went by, and I still hadn’t conceived.
I used ovulation strips to test whether I was ovulating, these were really good. The gynaecologist also commented that I wouldn’t be ovulating every month any more, and would be lucky to be ovulating once in 3 months.
I really wanted to make sure we were doing all we could to maximise our chances, but it all seemed a bit much. A GP friend who is a year younger than me had just had a baby. She told me that they had been trying for years.
A bit of good news was that my brother and his wife announced that they had got pregnant after 8 years of trying and several IVF treatments. Whilst I was incredibly happy for them I secretly hoped that it wouldn’t be the same for us.
To find the cause of my irregular periods they did blood tests and ultrasounds. When no cause could be found they then did a hysteroscopy, where a small camera is pushed into the womb to check the womb lining. They found a small lump or polyp and this was removed. (And luckily this turned out to be benign)
By the end of the next month I found out that I was pregnant. We were so delighted. And then, when reality set in we were also absolutely terrified! 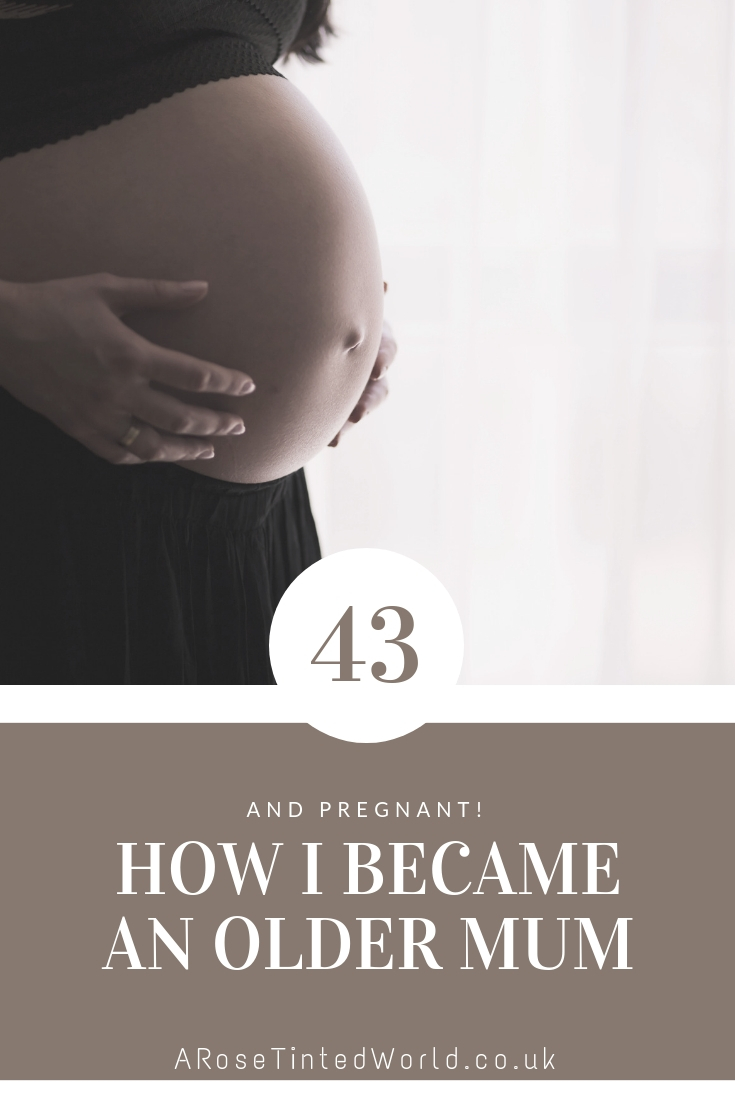 My pregnancy was uneventful, thank goodness. Apart from a bit of food poisoning early on.
I had minimal morning sickness. I was however worried about my weight. As you may have read, I have always had weight issues, but when I got pregnant I weighed over 15 stones. Not ideal.
Thankfully it wasn’t made an issue of by the midwife nor the consultant obstetrician. My age worried them far more. I was amused when the midwife put in my notes that I was an ‘elderly primigravida’. Way to make me feel old!
At 12 weeks I went public at work with the news. Most of my colleagues were delighted. But I was slightly bemused by some of my patient’s comments. “Was it planned?” was a regular question from some of my patients.
I wondered why they said this. Was it because I am older? It did make me chuckle.
However, I was less amused when I received a phone call from a hospital midwife around the 12 week mark discussing the increased risks of Down’s Syndrome.
I was offered extra tests, as statistically women over 40 have a greater chance of having a baby born with Downs. I refused the tests. There are risks associated with having the tests, and I did not wish to risk my pregnancy in the slightest. Nor would the outcome of the test have changed me having the baby.

Later Stages of being Pregnant

I felt great in the second trimester of pregnancy. I had tonnes of energy, and did lots of planning for the nursery, and buying of the things that our new baby would need. See some of the things that I can recommend, and what I wouldn’t waste money on.
However when the third trimester came around, I really started to feel achy and weary. I am pretty sure my age didn’t help with the way that I felt.
I had been told I had an anterior placenta. This meant that my placenta was placed to the front of my stomach. The placenta is normally more towards the back behind the baby. My anterior placenta meant that I felt much less baby movements than normal.
And to top it all off, my extra weight also hindered being able to feel my baby move.
I was very scared at this lack of movement, and my anxiety made the last few weeks of my pregnancy very stressful.
Maternal Mental Health and Me – how my anxiety shapes me as a mum.
At the end of the day I was very thankful when the consultant agreed that due to my age, weight and complications I should be induced at 38 weeks.
Two days after my 44th Birthday, my little girl was born. Pregnant at 43 – Mummy at 44.
Now I look back and realise how absolutely lucky we were. I naturally conceived at 43, which is quite miraculous. Also, I truly believe that if I hadn’t had the polyp removed that the right conditions wouldn’t have been there. Who knows, I could’ve still been trying?

Trying for a second child after my first was beset with all kinds of issues. Being older, I didn’t heal as quickly. I ended up suffering adhesions after my caesarean section.

We did try, but it did not work for me having a second child. So I finally came around to accepting the fact that I was only going to have one child.

Being an older mum is tiring. I do sometimes feel too old for it all. But its is what it is. I am just glad to have been given the chance to have a child, even if it had to be in my 40s.

Have you had a child in your forties?

How have you found it all? I would love to hear your stories. Do comment below, or contact me on social media.
How to handle pregnancy as a dad.
Enjoyed this? Why not read about my Birth Story
Or read my Ultimate guide to Post C-section care – whether your caesarean was elective or otherwise.
And please do pin this for later. 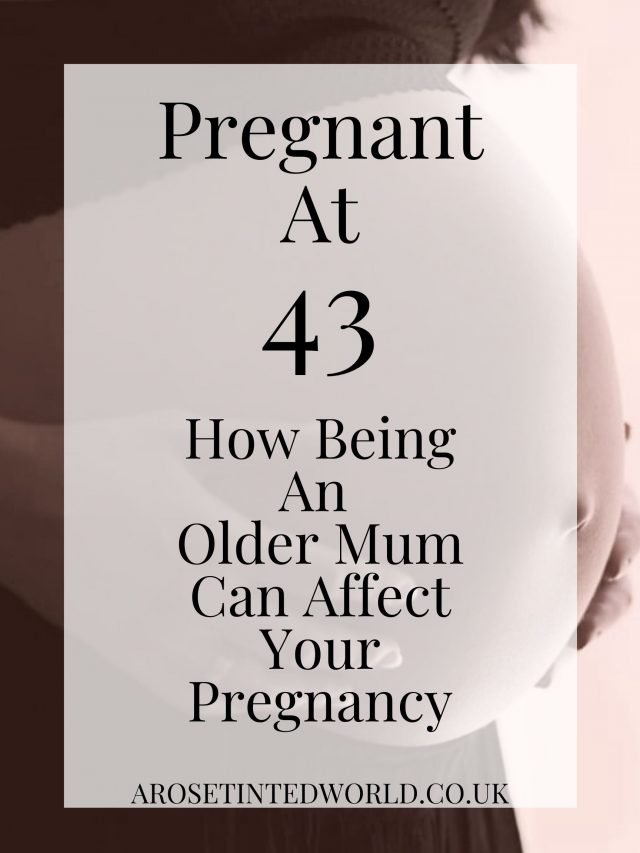