After a 30 hour long induction and emergency c-section, I was overjoyed that the birth was over and that we had a healthy baby girl. But I hadn’t planned a caesarean, so wasn’t fully prepared for the experience. Looking back, these are the post C-section tips I would give to myself.

This article was originally published in August 2018, but has been updated. Last update: July 2020. 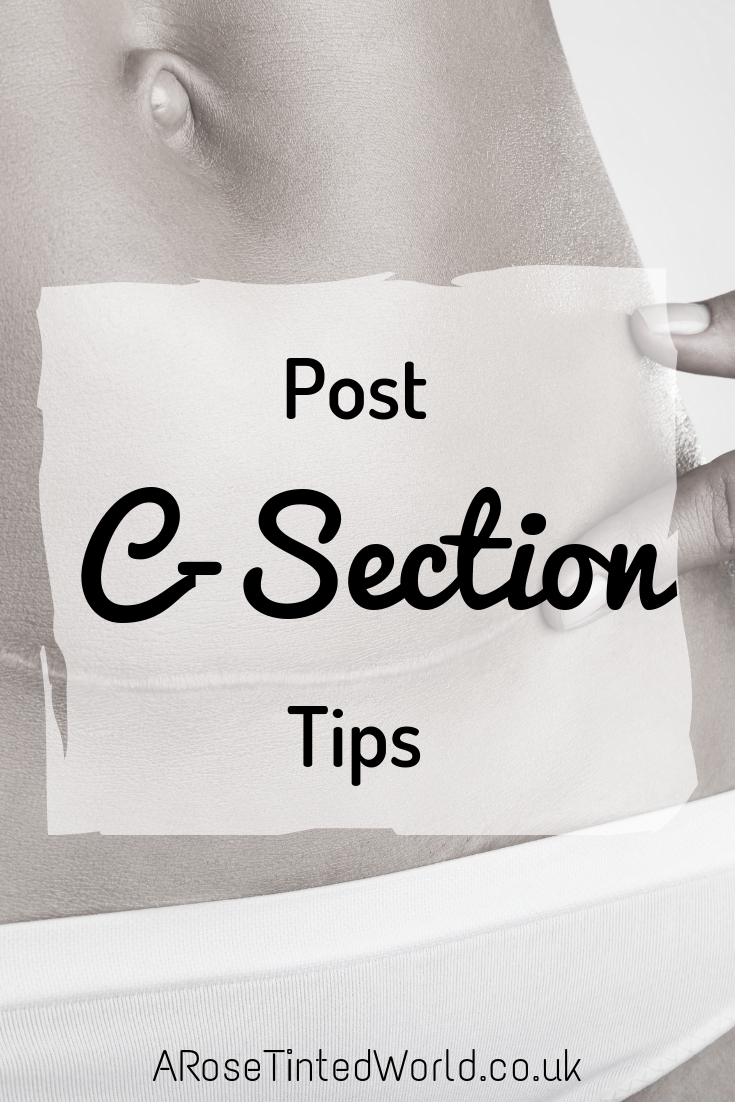 Soon after I came out of theatre, I was given an intravenous drip of antibiotics –  I was told I had a bit of an infection.

Because of the epidural and c-section I was also catheterised. A tube had been inserted into my urethra to drain urine into a bag. As the epidural numbs all control over urination. I was told that this bag would have to stay in place until I had produced enough urine to ensure it could be removed.

Secondly, in the recovery room, the nurses had given me a bit of a wash down. I couldn’t really feel my arms fully after the epidural. They had changed my underwear, and placed a nursing sanitary pad. So be prepared to feel a little helpless at first. You may not be able to feel much, though it is unusual for the epidural to affect the arms.

It is normal to bleed a lot after giving birth, which is why the nurses had placed a pad in my underwear.

But when I got onto the ward I had already bled through the pad, my underwear, AND my pyjamas.

1. Prepare to bleed a lot

I was prepared for this anyway. A friend had advised me to have some Tena pants (the pull up full nappy type) in my birth case as well as maternity pads. So I had bought a pack of 10. How glad was I that I did! They may not look stylish, but they coped so much better than pads with the bleeding. And they didn’t chafe the caesarean scar as it was dressed well.

I noticed that the hospital had disposable mats on the beds to protect them, so I actually bought some of these for when I got home to protect my home bedding. I never realised that you can bleed for up to 8 weeks after giving birth!

2. Prepare to have a catheter bag

I hadn’t planned for a c-section, so a catheter bag had never figured in my plans. Not only was I limited by the intravenous drip wires, I now also had a designer handbag full of wee to lug around the ward. And negotiate when I was trying to get into position to breastfeed my baby. Again the Tena pants were great for this as I could tuck the catheter bag into the top of these.

3. Be aware that you are going to be stiff and in some pain

You’ve just had pretty major surgery. So do be prepared for some pain. But I will say, even though I was older and less fit than a lot of people, I had very few issues with my caesarean. I did make sure I got up and mobile as soon as I could after I could feel my legs. My core muscles were tender for about 3 weeks.

I did have some pain. On the ward I was only offered paracetamol and ibuprofen. And some diclofenac if I really needed it and asked for it. I probably only asked for it a couple of times. I was quite surprised about how little pain I felt. But do be prepared to ask for more painkillers.

4. Prepare for looking after the scar –  keep it clean

My scar did weep, but luckily I was kept in hospital for 5 days after giving birth, and they could redress my scar daily. The dressings they used were excellent –  I actually bought some for when I came home to maintain the good healing.

5. Prepare to be a little bit constipated after the epidural and birth

Maybe it is the epidural itself. Or the fact that I hadn’t really eaten much during the 30 hour labour experience. Maybe it was the post operative drugs. Or that you are immobile for a few hours after the epidural when you cannot feel your legs.

At the end of the day all this meant that I ended up being very constipated for a couple of days after giving birth. The only solution was asking Andrew to sneak me some lactulose from home to help me ‘go’.

6. Don’t be surprised if you are kept in hospital for longer

Even after a caesarean, some hospitals send you home after one night. So be prepared to go home quite soon.

But all my complications meant that I was kept in hospital for 5 days after giving birth. I had to get Andrew to bring in my slippers and dressing gown from home. Be prepared and maybe pack a few spare sets of pyjamas and spare underwear in a bag – just in case.

7. Remember how limited your movements are going to be

I did keep forgetting this. Do take it slowly at first. Just don’t start an action that you can’t follow through.

You’ve just had a big operation and your core muscles have been cut. It will ache and you won’t be able to bend over for a few weeks.

For instance, when we got back from the hospital I got onto my knees to get into the fridge. Only to find that when I tried to stand up I couldnt get back up again. My core muscles just weren’t able to work to do this. I had to call Andrew to come help me. Thank goodness he was around and not at work!

Similarly for a couple of weeks I needed him to put my socks on and put my feet into my trouser legs. It comes as a huge shock to have to rely on someone else to do such a simple thing. And not be able to bend over to do certain tasks. Remember that your movements are limited for the time being.

And remember…You also aren’t supposed to drive for 6 weeks afterwards. 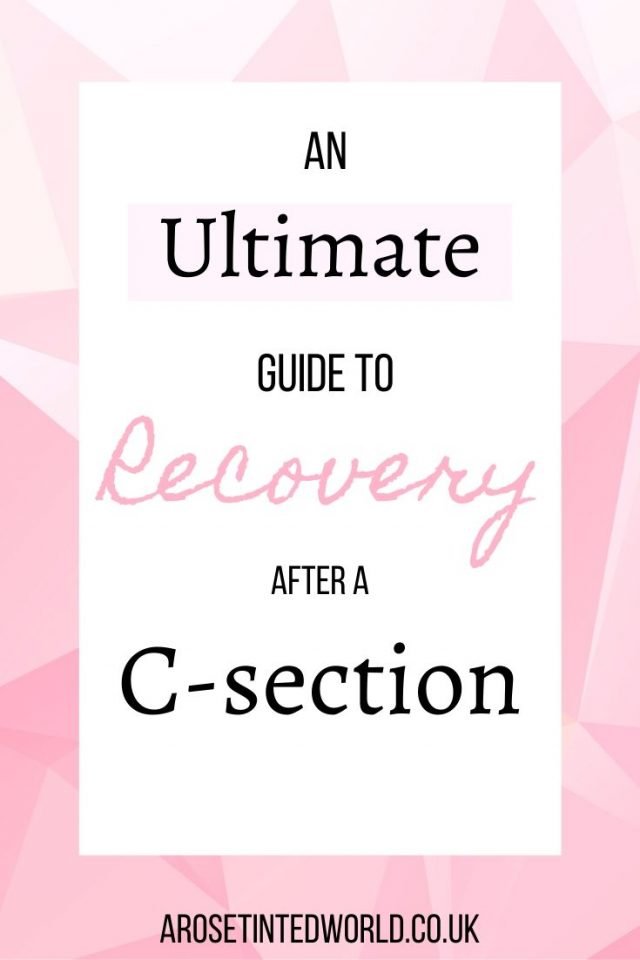 Hope you’ve enjoyed my top post c-section tips. But here are some other brilliant ways to prepare, whether you have a caesarean or not.

Take a tape measure in your birth case.

We were never told Elizabeth’s length when she was born. A lot of the baby memory books have a space for this information. So take a tape measure if you would definitely like to know this.

If you want a copy of your notes photocopy them.

I am sure that you are entitled to a copy if you request them under the data protection act, but it is useful to know that the midwife does retain your notes after your last post natal check. So we took a copy before we handed them back.

You may not be served breakfast on the ward

After the first night on the ward I had not slept, I had tried to feed Elizabeth every 2 hours. I could hardly stand up straight and was tied to an IV drip with a catheter bag. My body was a wreck. But I was expected to go to the day room to get my own toast and cereal. I ended up sending Andrew as soon as he arrived. Maybe send someone for a costa and some coco pops?

At the end of the day you have had major surgery. You do need to remember that. You will probably have been issued with some beautiful surgical stockings which you need to wear for 7-10 days afterwards. This is because you have been immobile after the operation, and there is a risk of deep vein thrombosis.

In addition to this you may also need to inject yourself in the tummy for a few days with a drug called heparin, to also try to stop a clot developing. I’d never had to inject myself before and even though I am used to injecting dental patients daily it came as a shock to do it on myself!

So – my tips on what extras to pack in your birth bag for in case you have a c-section birth?

I hope that you find these Post C-section tips useful. Have I missed any that you found helped you? Do comment below. Or tell me on social media.

enjoyed this? why not read how I got over my caesarean. Are you having issues after your C-section? You may have adhesions. 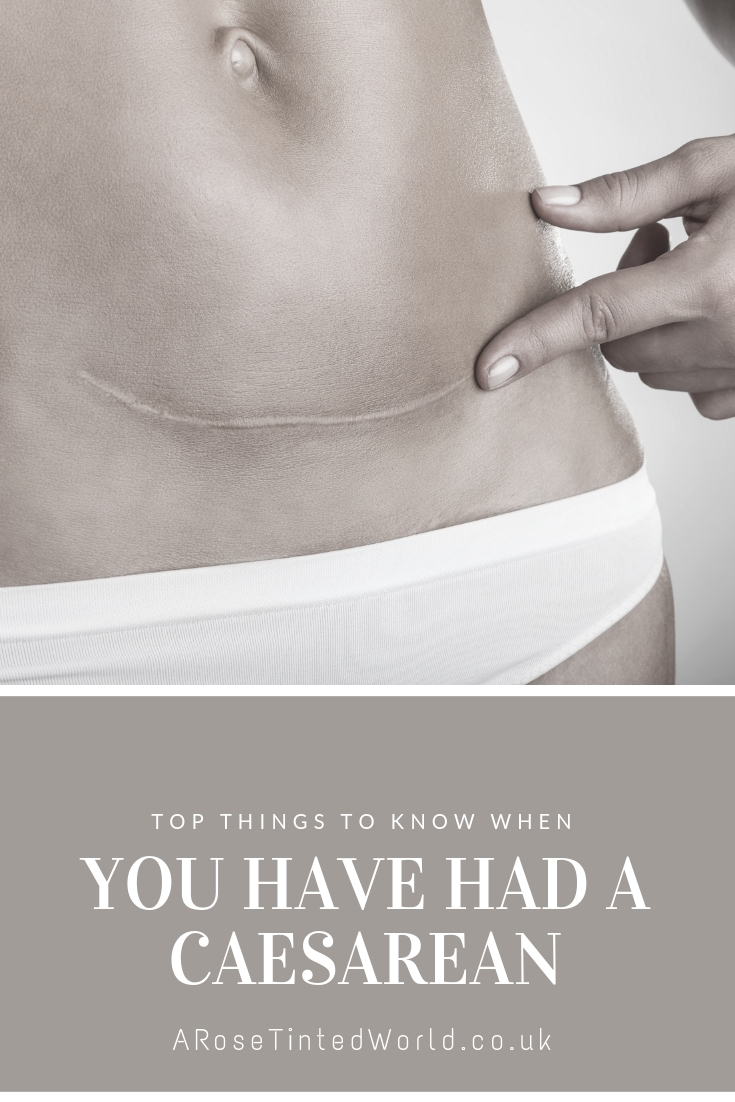