Just recently we spent a few days on holiday in the wonderful peak district. One of the highlights of our stay was Crich Tramway Village. This is the home of the National Tramway Museum. There is such a lot to see here! 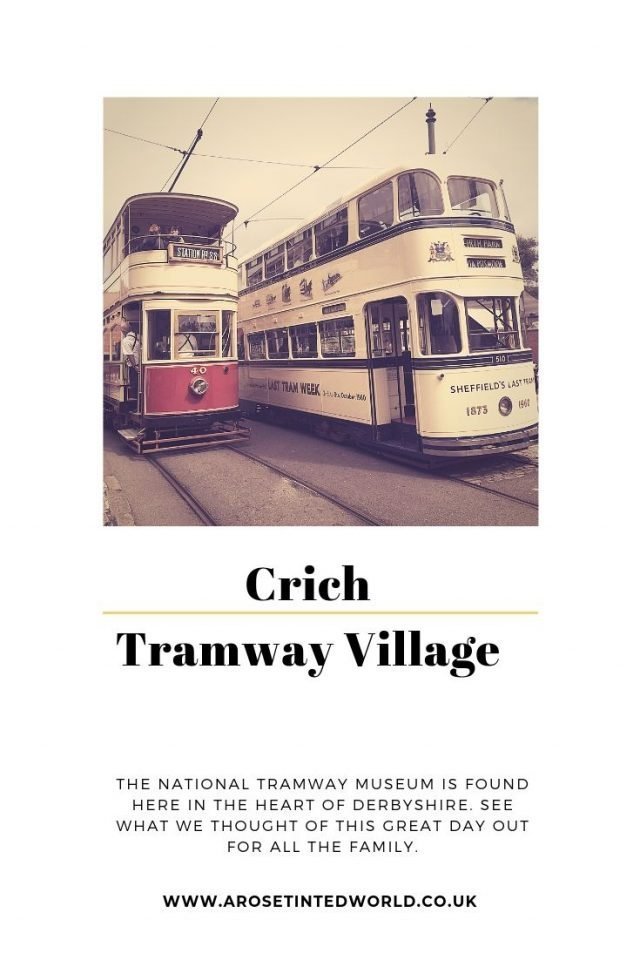 In fact, as you pay your admission fee, you are told that your full price ticket will now give you free admission for the rest of the year, so you can revisit if you do not get a chance to see everything. (The only days you cannot visit are the special 40s and World War II days held periodically throughout the year)

You also get given an old penny or halfpenny to use as your ‘fare’ on your first tram ride.

Crich Tramway Village is home to over 60 original and restored trams. The trams were in active service between the 1880s and the 1960s. Some of the trams are still in full working order.

At any time, 3 of the restored trams run along the tracks up and down the village. As you walk down the slope from the Admissions Building you are greeted with the wonderful sight of a Victorian bridge over the tramlines. Beyond that you can see a painstakingly recreated period street of the tramway village. 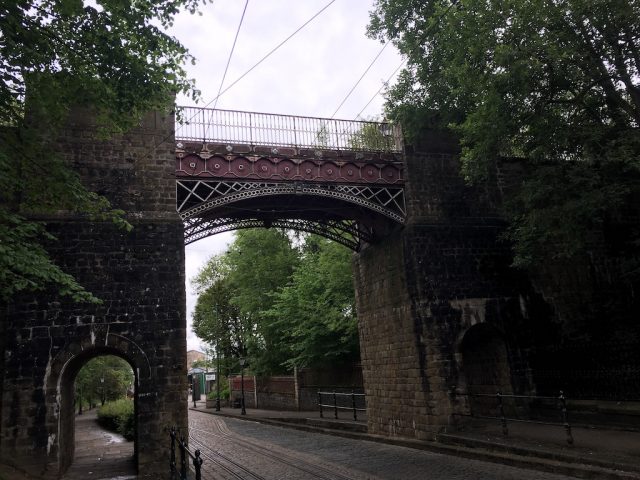 As you walk down the street it is like stepping back in time.

The Red Lion Pub is a perfect example of a Victorian Ale House. In 1973, the Red Lion was due to be demolished in Stoke-On-Trent, but a local architect came to its rescue, and it was transported brick by brick to its current residence in Crich Tramway Village. They do sell alcohol here, and light lunches. 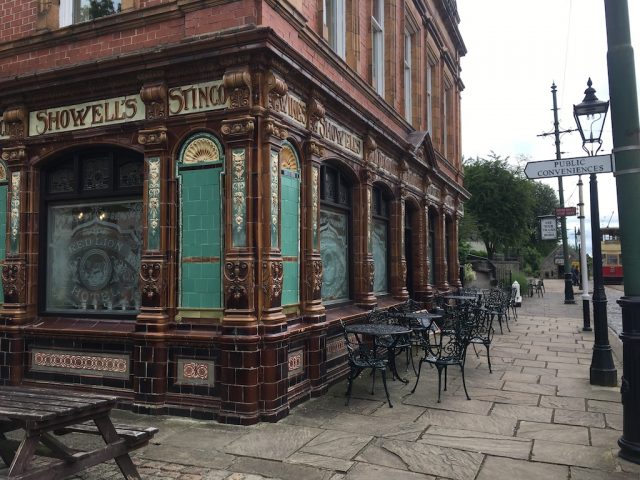 Rita’s Tea Rooms sell cakes and afternoon teas. Perfect for a spot of lunch during your visit.

There is Barnett’s Sweet Shop selling old fashioned sweets, and an Ice cream parlour. The Forge Gift Shop has all manner of tram related gift items.

And finally there is The Eagle Press, a small building where you can see how they used to print flyers and papers for people to read. It still maintains the smell of a small working business. The flyers it prints were used to advertise local businesses. In fact, they still have a fully operational 100 year old Peerless Platen Press.

Around the village are lots of historical artefacts and signs. Such as old advertising hoardings, blue police boxes and post boxes from the era. It is a wonderful place to explore. 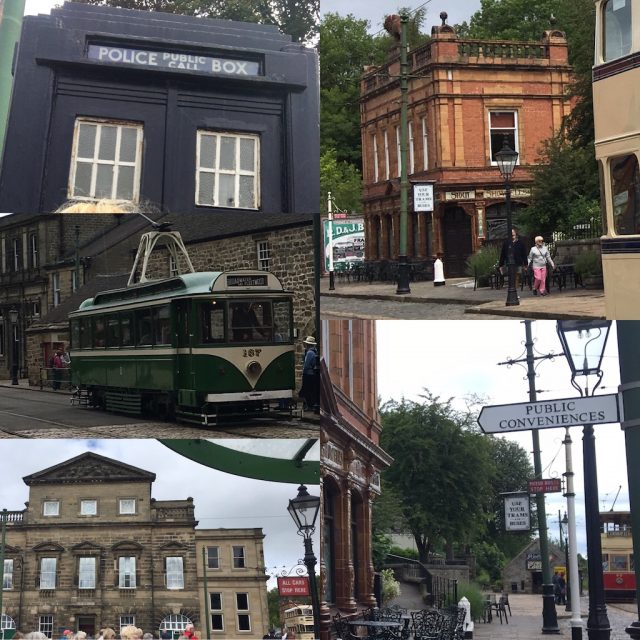 Also on the main street at Crich Tramway Village is a centre devoted to George Stephenson – who was known as the ‘Father of Railways’. He was the inventor of the Stephenson gauge rail, which is the basis for the gauge most rail systems in the world still use today. And trams also used this gauge. As well as being an inventor and pioneer of rail transport, George Stephenson had many links with Derbyshire. He worked on the railway links between the midlands and the North of England, including York, Leeds and Manchester. And when tunnelling to make the railways discovered seams of coal he also invested in the mining industries in the area.

He lived, died and was buried in Chesterfield.

Down at the end of the period street  (Town End) is a large building with a very ornate facade. In actual fact, this is the original 18th Century facade of the Derby Assembly Rooms, brought here after a fire in the 1960s. This building houses the villages exhibitions. When we visited the current exhibition was all about the past role of the trams in the postal system, but this will change at the end of 2020.

At the Terminus itself, there is a tram stop, where you can wait for the next tram to arrive. Trams are about every 10-15 minutes. 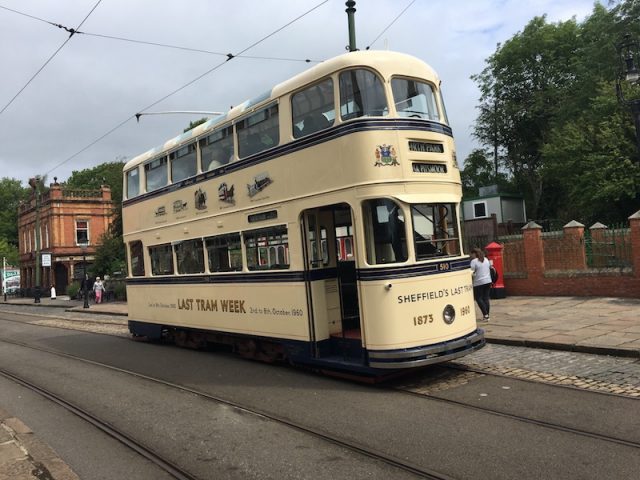 You can ride as many times as you want during the day, but our first ride was on this double decker tram that had originally been built for Sheffield. Sheffield lost a lot of trams during WWII, but this one was in active service until 1960. It had great features, such as seats that can be moved to face the way the tram was going (most trams can be driven from both ends) and signs saying “Do Not Spit”. On alighting the tram, we swapped our old pennies for a ticket that could be used all day. 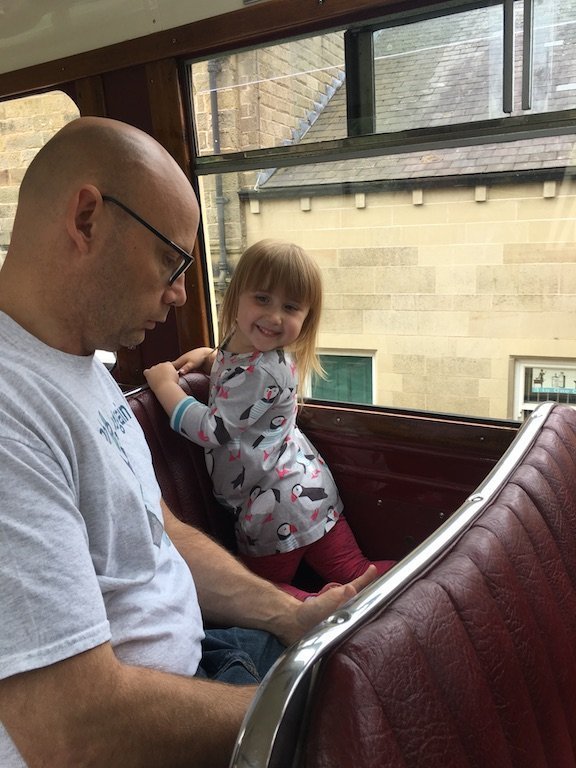 Prams are not allowed on the trams. But there is a buggy bay. And there is a wheelchair accessible tram that runs on request.

There are 4 stops on the tram journey in total. But we travelled past Victoria Park, with its bandstand, and past Wakebridge, to Glory Mine. And then took the tram back.

One of the stops on the tram’s journey is Wakebridge. And here you can find a display dedicated to the mining industry that was prevalent in this area. Lead mining was widely carried out here in the 17th and 18th Centuries.

Whole families came up here to make mining a business. Lead was a valuable commodity for gunshot, leaded windows, and cosmetics (even though they didn’t realise how poisonous it was!)

As you can imagine, it was hard, dangerous work.

The Woodland Walk and Sculpture Trail

From Wakebridge you can cross the tramlines, and follow a woodland trail through the trees back down to the main street at Crich Tramway Village. And it is an amazing place, with many hidden giant wood sculptures to find. And amazing views over the Derwent Valley.

Amongst many other things we rode a giant ant, met a wooden Mr Potato Head (which we quickly turned into a Picasso-esque version!), met a troll, a wizard and played a wooden drum set. Some of the sculptures are in a sorrier state than others, but there is a woodturners yard (off limits) where they are obviously making lots of new sculptures. 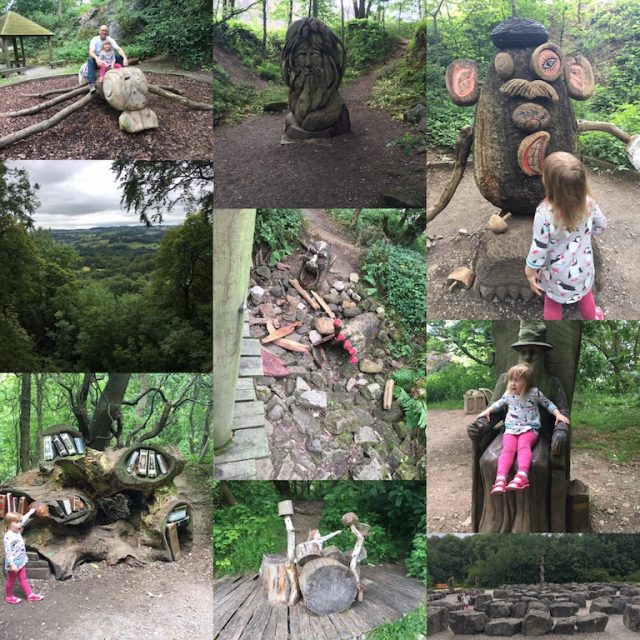 We actually really enjoyed this part of our day. E adores running and exploring. And as we got almost down into the village once more, there is a very large outdoor playground with lots more options to climb and play.

There is also an indoor soft play area. We did not visit this, but I an imagine it is a welcome place on a colder, wetter day.

In the Tram Depot you can visit the full collection of historic trams that Crich Tramway Village has to offer. I was delighted to find a few Leeds City trams in the collection. My Dad was a conductor in his youth. I wondered how many of these he may have ridden or maybe even been the conductor for? 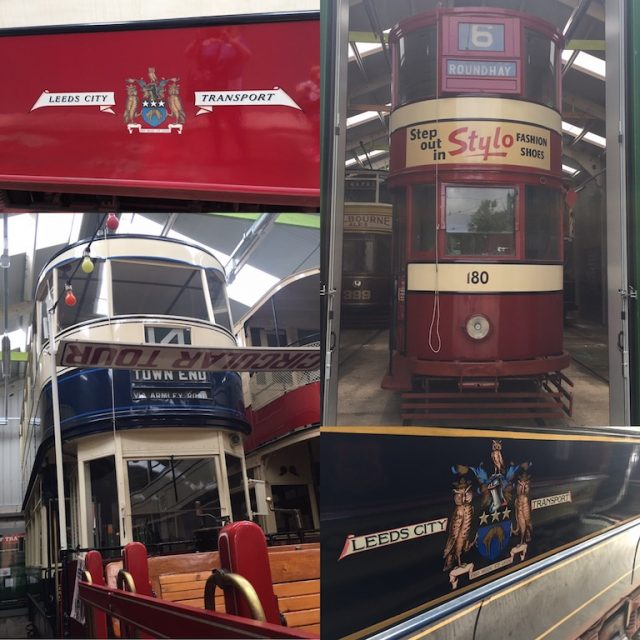 There is also a Workshop Viewing Gallery where you can watch some of the trams being restored.

In the Great Exhibition Hall you can see models of tramcars running on sections of track. And also get to see some more close up tram exhibits.

As you leave the village and walk back up towards the exit, you get a lovely view of the Bowes-Lyon Bridge. This cast iron frame bridge was originally built in 1844. And used to be situated in Hertfordshire, but was brought to be reused at Crich in 1992. It is such a lovely setting and memory to end your day with. And from the top of the bridge you can get a great view of the period street setting. 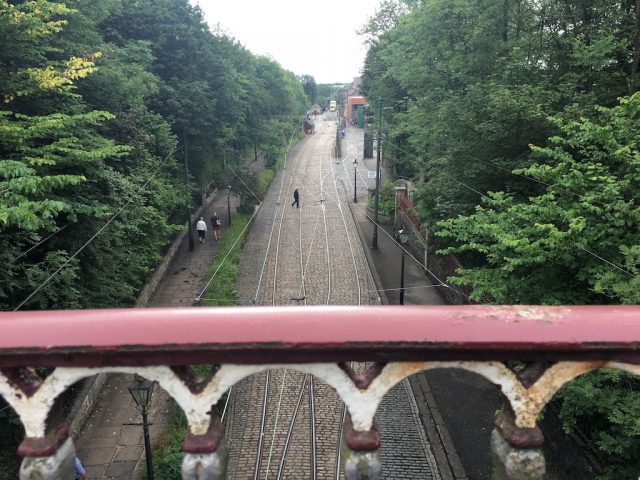 Other Things To Know About Crich Tramway Village

See the official website of Crich Tramway Village for days and times of opening and also these details:-

Please also find the current prices on the website. At the time of writing this, prices were

You can book online and save 50p per ticket. Parking is free. 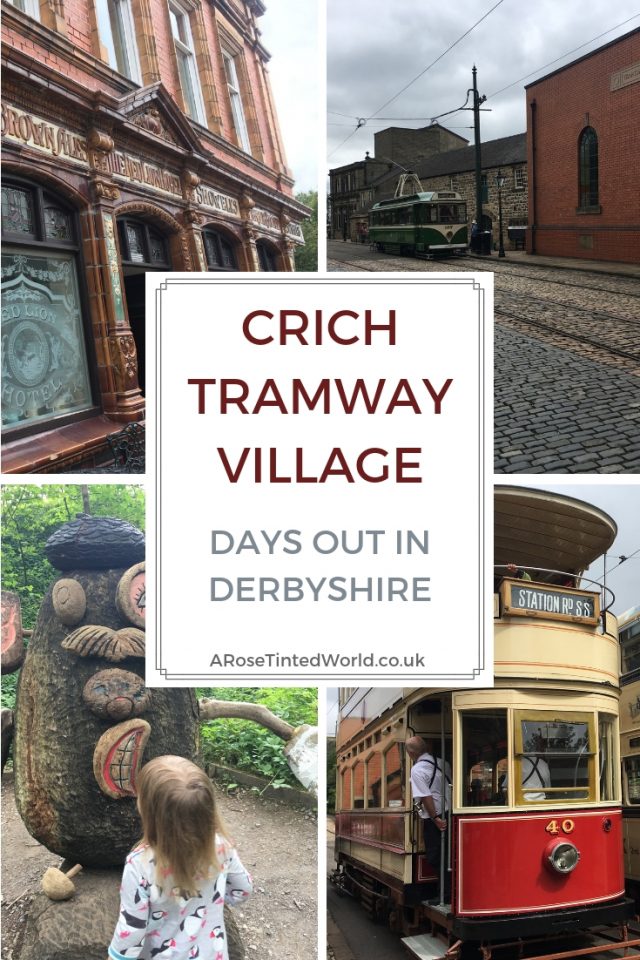 We really enjoyed our day here and think it is one of the gems of Derbyshire.

We also visited Gulliver’s Kingdom, here is our review

And The Heights of Abraham is close to both of these.

See some other places to visit in the Peak District 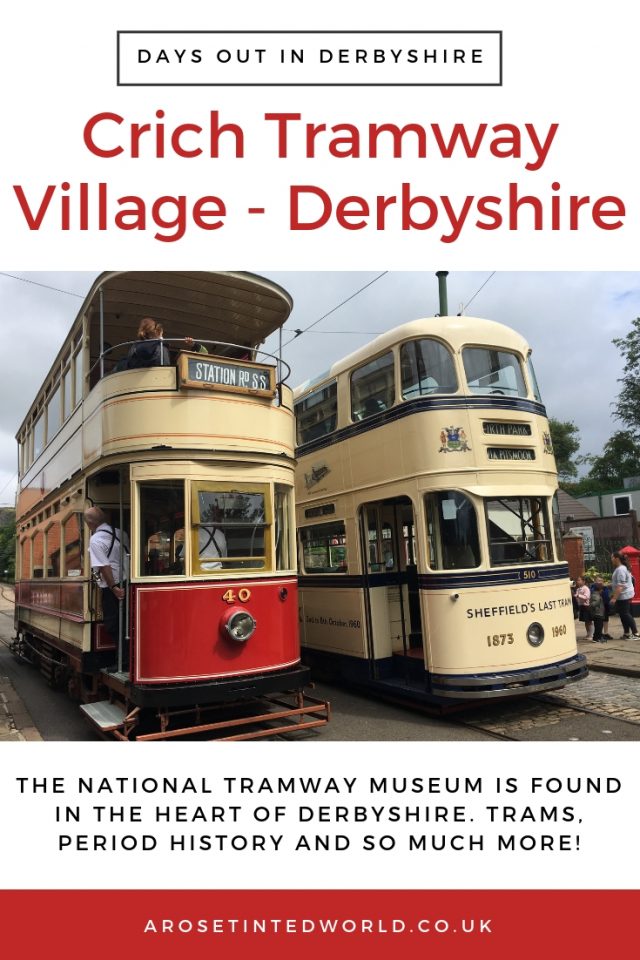