My word of the week this week has been Belief. Especially Self Belief. 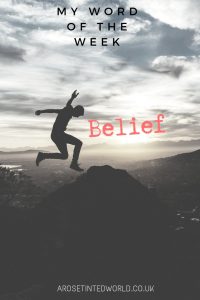 My OH made a shocking statement this week. He said that he doesn’t enjoy some of my posts as he feels that they are not authentic. Not truly me, because he says that I am not living the perfect life that I am portraying.
I felt a little hurt by this, as I actually don’t think that I am portraying myself as being perfect at all! I am always a work in progress, a bit like a lot of my sewing projects! But it did shake my self belief a little.
Similarly, in a WhatsApp exchange this week a person in one of my conversations said that she was tired of her current job and expressed a desire to do something different. A person that I consider a ‘friend’ who is also in the group commented ‘Brown owl? Market Trader? Blogger?’

To me that bunched blogger into the same realm as the other ridiculous possible career moves that she had suggested. I was offended and said so, and she told me I shouldn’t have been. But it was a little late. I feel like she has no belief in what I have chosen to do.
A strong sense of self belief is a really important thing to have and keep in this world. I will never understand why people always try and put down others.
Not many people seem to believe in each other in this world. Or actually admit that they believe in each other. People don’t seem to like giving others a leg up or some help. Maybe its is because they are afraid that you will outshine them once they have helped you. I don’t know. 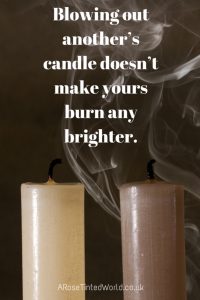 Or maybe they think that you will succeed where they have failed. And people don’t like that do they? They don’t like you to succeed. As it makes them feel so damn inferior.
If you have no belief in me then I am afraid I have no time for you. I have a belief in my own abilities. I’m absolutely amazing if I set my mind on it.
Actually, anyone who ever helps me will find me to be quite a formidable ally. I’m loyal, reliable and a pretty useful person to have around. I pick things up quickly and am usually very grateful to those that help me. I never forget to return the favour. One good turn always deserves another.
The world might be a nicer place if we did help each other. After all; 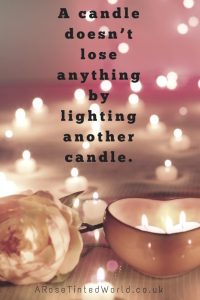 I’ve worked hard to get my year off. I have worked hard getting my blog up and learnt more about computing in the last three months that I had in the previous 46 years. I would love to see the attempts of those that think that it has been a silly or easy decision.

Never Tell Me That I Can’t Be What I Want to Be .

I once had a Biology teacher who told my parents when I was doing my A levels that I “didn’t have the stamina” to do dentistry as a career. 25 years on I think he pretty soundly got that one wrong!
Never tell me I can’t do something. Or so help me I’ll be out there at all hours proving you wrong.
But actually at the end of the day I should feel a little gratitude for those who have hindered me or tried to keep me back. They have usually indirectly caused me to be even better by my will to succeed. 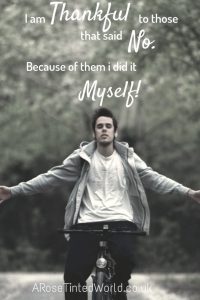 Have you ever felt that someone has lost their belief in you? Or had your self belief rocked, yet got over it? I would love to hear your stories.
Read about my Focus or my Reflection