You’ve just come out from having a caesarean. You’re happy that your scar is healing well, and you seem to be on the mend after some fairly major surgery. But have you had a general undiagnosed pain in your abdomen even years after having a caesarean? Something that no one really does tell you about is future postpartum complications. About adhesions after a c-section.

*This post has been updated, it was first published in October 2018

Adhesions After a C-Section

For me, the first three weeks after having a C-section were actually far better than I had expected.

I’d had to stay in hospital for 5 nights, by which time I felt that I had really started to heal. My scar seemed to be settling well, I started to be able to stand upright again and I was regaining good mobility. I put this down to staying quite active after the operation.

Of course, because of the surgery, sitting up was hard from being laid flat, but I was coping well. And then about a month after having Elizabeth I started to have some real problems.

The first thing that I noticed was that I had some real problems after eating. Straight away after eating my abdomen would swell up and be really painful. It felt like something was really pulling inside. And heaven forbid I ate anything spicy! My stomach would end up like a balloon.

At the same time I had a real back pain. But the pain would also be much worse if my stomach was painful. And my pelvis was really aching.

Now, when I had been pregnant I had definitely had pelvic pain in late pregnancy (as the pelvis ligaments start to soften in late pregnancy it is common to have pelvic pain) so I just considered all this to be a side effect of my body trying to get back to normal. But after almost 3 months I went to see my doctor.

He referred me to a physiotherapist, which was (slightly) useful for the back pain, but didn’t quite address the abdominal swelling or the pain after eating.

About 4 times I visited my GP, each time saying how bad my stomach pain was and how I swelled up with food.  I ate a FODMAP, gluten free and dairy free diet but to no avail. Even started eating bran fibre. I stopped caffeine, fruit and fizzy drinks. Nothing changed.

The doctors prescribed buscopan and peppermint capsules, telling me that I had developed irritable bowel syndrome after being pregnant.  The tablets helped, but not much.

I was also hoping to try again for another baby with my partner, but intercourse was painful and I would swell up afterwards. It would cause an awful lot of pain and so we stopped trying.

It was a major factor in why I am now resigned to only having one child.

I Was Really Worried.

I pushed my GP for a second opinion and thankfully a bowel cancer screening test came back negative. They also referred me to a gastrointestinal consultant.

By this time a good 9 months had gone past. I was at work, but pretty much living with constant daily pain. It would have been great to say that I was losing weight due to all this, but I wasn’t. I was so upset on one GP appointment that she declared that I was suffering from post natal depression and gave me antidepressants! She actually thought that they would help with the pain. Unfortunately they didn’t really.

After just over a year I was seen for an MRI scan at a local hospital. The consultant examined the images, again reassured me that it was nothing serious. But he told me what it probably was.

He told me that he thought I was suffering with adhesions after a c-section. Until that point NO-ONE had mentioned adhesions!

Strangely enough, a friend of mine was also having some real issues. Like me, she had real bowel problems, with IBS symptoms that did not resolve with any treatments. She also had many endometriosis symptoms, and was finally going to have an operation to investigate the cause. She had been having these symptoms since she had had a caesarean a number of years previously.

When they investigated her pelvic floor in keyhole surgery they found lots of scar tissue which they attributed to her caesarean years before. They warned her that it may affect her future fertility.

It was also possible that these adhesions to her bowel could cause a bowel obstruction or tear. Finally they told her that these were adhesions after a c-section, when no doctor had ever even mentioned this as a possible cause of all her troubles.

Sadly, I was also warned that there was no way to remove any adhesions. If you try and remove the scar tissue with surgery, it just creates a further problem as more scar tissue comes to bind the area even more. 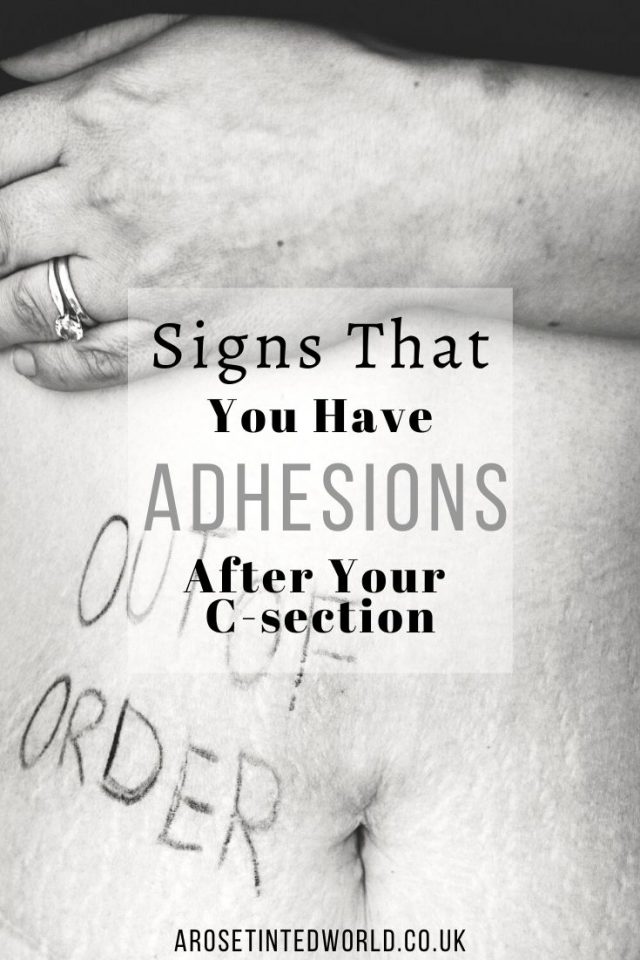 So? How do you know that you may have adhesions after a c-section?

The following symptoms can arise with adhesions after a c-section.

I will say however that my scar is none of these.

Almost 5 years on I still do suffer occasionally with abdominal bloating. I also occasionally suffer after eating spicy food, though not to the extent that I did that first year. After about 18 months I found that the swelling and pain became far less frequent, and whilst they haven’t completely stopped, they do not affect me day to day like back then. I definitely have more diarrhoea and constipation issues. And sometimes get pulling pains in my abdominal side.

My cure has been time. But I still would advise you try the IBS medications if that is your main symptom. I do still occasionally self prescribe buscopan and peppermint oil capsules / tablets if I do have abdominal pain. I would also say do go see your GP – as always I’m not a medic, so obviously their expertise is far greater. And every case is different.

A further thing that the gastro-intestinal consultant told me was that a lot of women suffer with constipation and IBS problem during pregnancy and after birth. In fact, he said that being pregnant and having children can completely change  the way the gut reacts.

No-one has told me this. When I was pregnant, I had suffered for the first time ever with constipation. The midwife did not really comment on this, she just asked me to stay more hydrated and gave me lactulose. But in truth I was actually drinking a lot more than normal when pregnant, as I am not normally good at staying hydrated.

Do Read Some Of The Comments Below

I have discovered since I first wrote this post 2 years ago that it really resonated with women from all over the world. I have subsequently had lots of really useful comments, suggestion and stories written in the comments of this post. Whilst it may not answer your questions, I would definitely say to give the comments a read that come after this post. And do add your own story or suggestion as it may be of use to someone else further down the line.

5 years on from my caesarean experience I do still suffer occasionally with tightness and some digestive issues. I also suffer from back issues… which I will possibly cover in a future post, as I do think these too stem from my birth complications.

So – do you have any of these symptoms of adhesions after a c-section? I would love to hear your stories. Do comment below. Or connect with me on social media.

Enjoyed this? Why not read  My Birth Story?

92 Replies to “Adhesions After A C-Section”