This has been a post long in my head, but I wasn’t sure that I could actually put it down. Putting it in words feels like an admission of defeat. But this week I’ve been thinking about it a lot. And I am coming round to accepting that I’ll only have one child.

Accepting That I’ll Only Have One Child 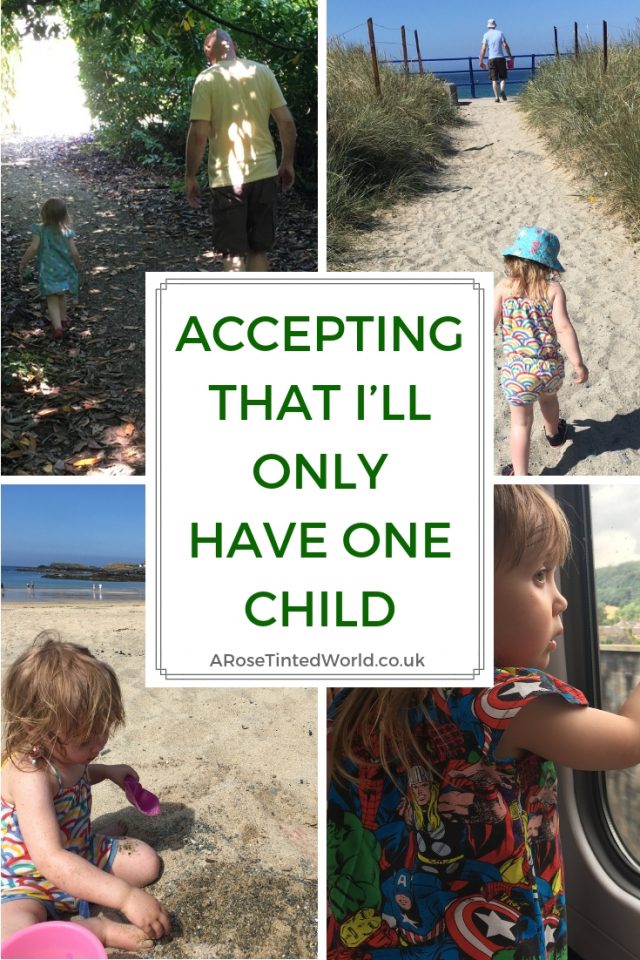 When I was younger I had a definite vision in my head. I would get married in my 30s, have a child a couple of years later and a second baby a couple of years after the first. It seemed like the normal way that things went.

But life doesn’t always go the way you plan does it? Actually, in my 30s I was with a man who didn’t really want to commit. I started doing a second job singing and travelling the country. I couldn’t really trade that life for settling down and children, or at least not with the partner I was with.

And so I ended up still being single at 40. And by the time I did find my perfect man and got pregnant, I was 43. I had our first baby at 44.

Barriers To A Second Conception

And then it seemed like barriers were put in our way to prevent me getting pregnant again. A close GP friend had advised that I definitely should wait a few months before trying again. And I was happy to agree, having a newborn is hard enough without thinking about doing it all again!

But also, after my emergency caesarean, my body wasn’t quick to recover. I spent the first year after having E in pretty much constant pain. It eventually was put down to having adhesions, and I still suffer from time to time. But it didn’t help in the bid for a second child. Time was marching on, and I turned 45.

Then came the worry of having a child with sleep apnoea. E didn’t sleep well, didn’t breath well whilst asleep. I spent a lot of time waking up and checking the monitor to make sure she was ok. And that took it’s toll on my mental health and my weight. Not sleeping enough coupled with worry and stress definitely made me eat more.

I was incredibly unhealthy and not in the best place for getting pregnant again. And as a couple we were both exhausted. Could we do it all again? At that point I really think not. We made a half-hearted effort at trying. But it didn’t happen. 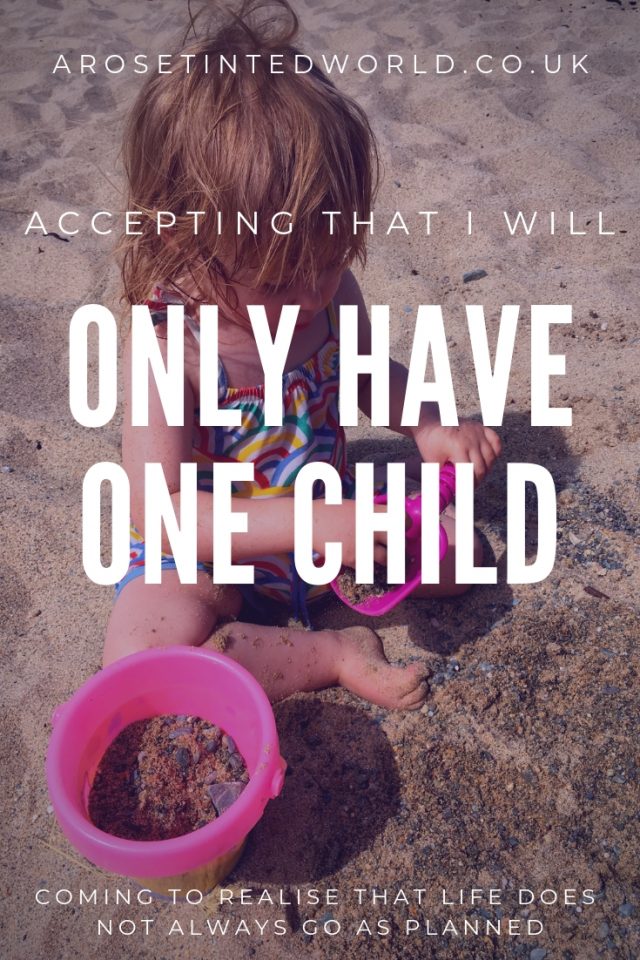 And part of me is glad that it didn’t. Though it has taken such a long time to get to this. I feel like such a failure for not giving E a little brother or sister. I hate admitting that. I’ve actually been battling internally with admitting it for a while now. It is a total list of ‘what ifs’…what if I’d not had a caesarean…what if I’d lost all my weight in the first year…what if I’d not been so stressed about everything?

Trouble is, these are what they are. I am who I am, and I realise that I am a real worrier. And I have put a lot of pressure on myself in thinking that I could possibly go through it all again with a second child. I think the time has come to finally admit to myself that the opportunity has passed.

I was 47 on my last birthday. Gorgeous OH is 50 this year. We have both admitted that it is just easier for us to have the one. And I breathed a sigh of relief at the weight lifted as I am accepting that I’ll only have one child. 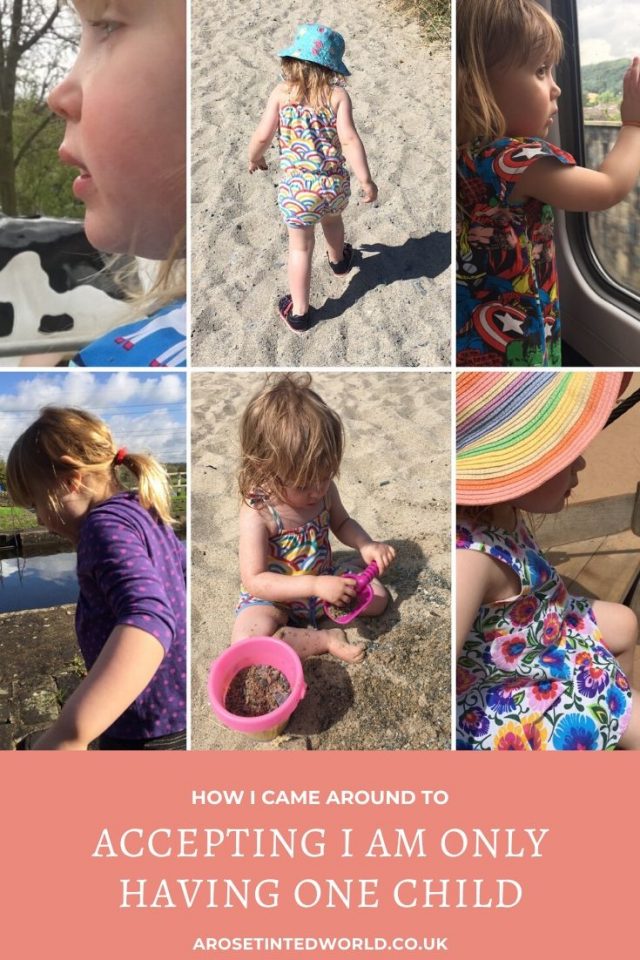 Maybe it is better to look at the benefits of not having a second child.

Will our only child be lonely? I do hope not. Only time will tell. She can play alone, but we do still play with her. And in my head I think back to when I was little. My brother is 3 years older than me. Did we always play together?! I don’t think so! I had lots of my own toys and spent a lot of time in my own imaginative world. As I am sure our little girl will. I don’t think that she is as likely to be as bored as you would think.

It may be a little sad. But our little girl is beautiful. And instead of worrying and fretting over having a second, I want to enjoy her more.

I Have Accepted That I’ll Only Have One Child

I’ll sign her up to some classes and groups where she can get all the friends and companionship that she needs. And make so much more of an effort to see my brother’s little girl. Now, I just need to clear the closets of all the clothes, toys, books and other things that I have kept ‘just in case’. It’s time.

Are you at the point of accepting that you will only have one child? I would love to know your thoughts. Do let me know in the comments. Or get in touch on social media. 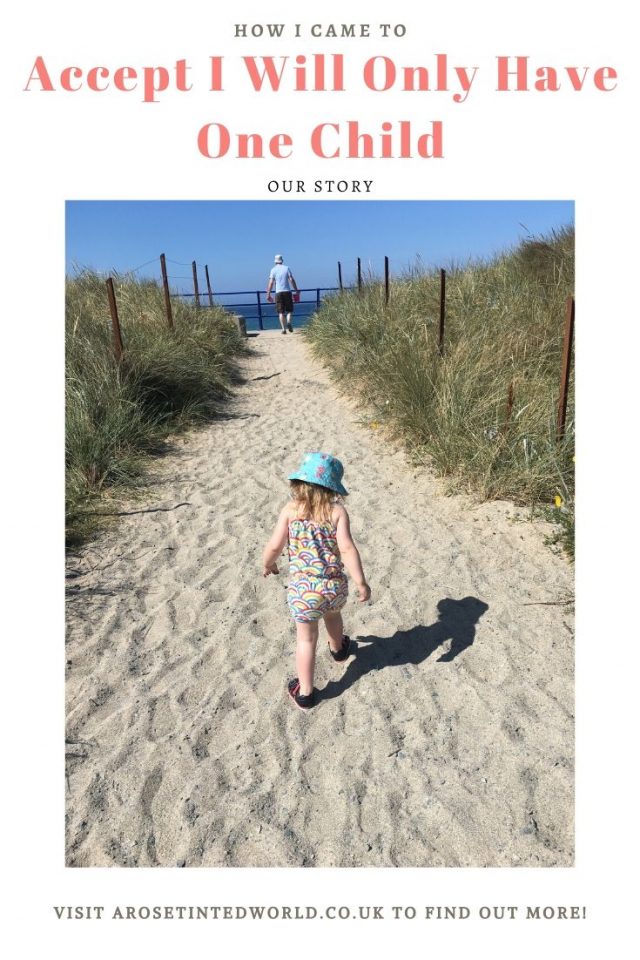 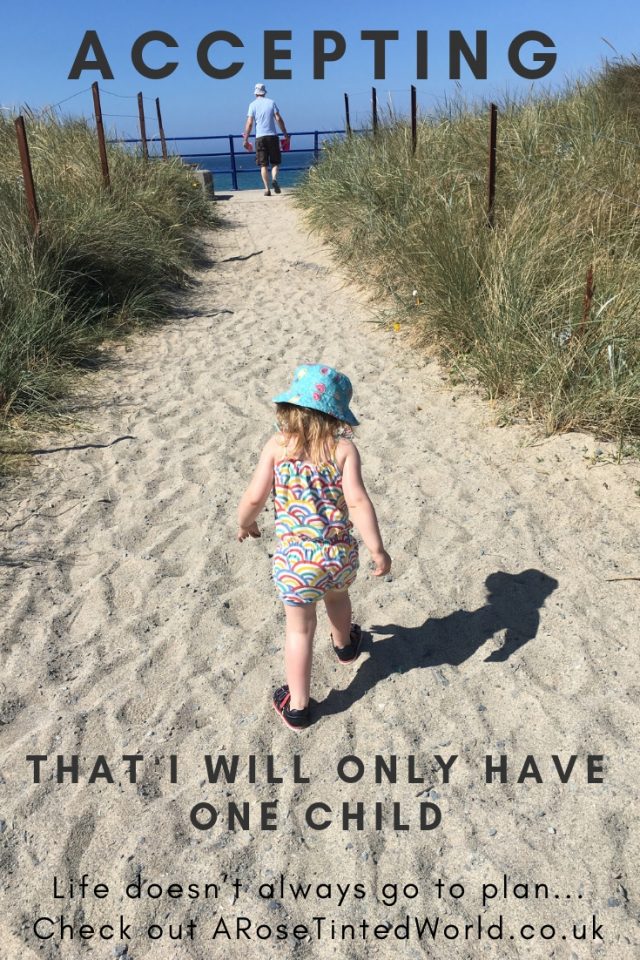 48 Replies to “Accepting That I’ll Only Have One Child”