On a wet and blustery day, what better way to spend time than going to a free museum? How would you like to spend a day discovering over 200 years of history and see some fascinating railway memorabilia? This week, we went on a trip to York Railway Museum.

A Trip To York Railway Museum 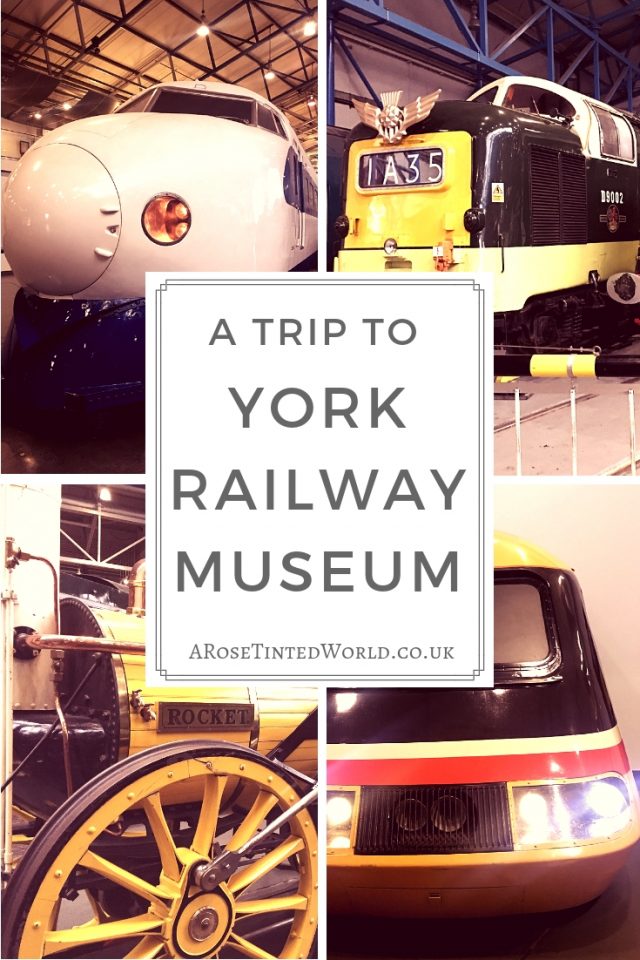 Our little girl loves trains. We have been on many a train ride around Yorkshire. Her favourite so far has been the Keighley and Worth Valley Steam Railway. So we thought that it would be a great idea for her to go see a lot of trains.

I have fond memories of going on a trip to York Railway Museum when I was a little girl. It was free when I was a child, and so it was always a favourite place for Mum and Dad to take my brother and I when we were younger. My brother was a bit of a train spotter in his youth. But I was more into the romance than the engineering. I loved the history of some of the older trains.

We are on a direct rail route to York where we live, so we caught a real train, and arrived at around 11am. There is a stairway back route out of York Railway Station that is signposted for the museum. The museum also has a visitor car park (current cost £10 a day). Finally, there is a mini train that runs between the museum and York Minster every half hour, as this is quite a walk.

The museum is totally free, though it does encourage voluntary donations. It consists of 3 main halls and an outer yard, all connected by a walkway. We entered by the main entrance, so our first port of call was Station Hall. 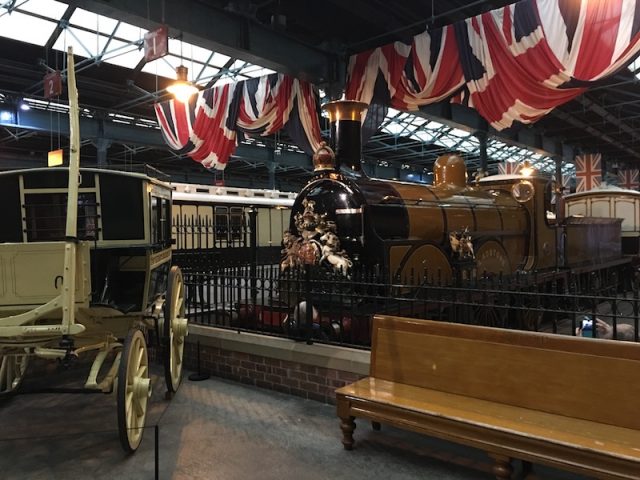 Station Hall recreates the ambience of a period railway station in the golden age of steam. There are some beautiful old steam engines and an amazing collection of royal carriages. See how Queen Victoria, King George V and our current Queen Elizabeth travelled in style. And there is a brilliant example of what train travel was like in the 1970s. 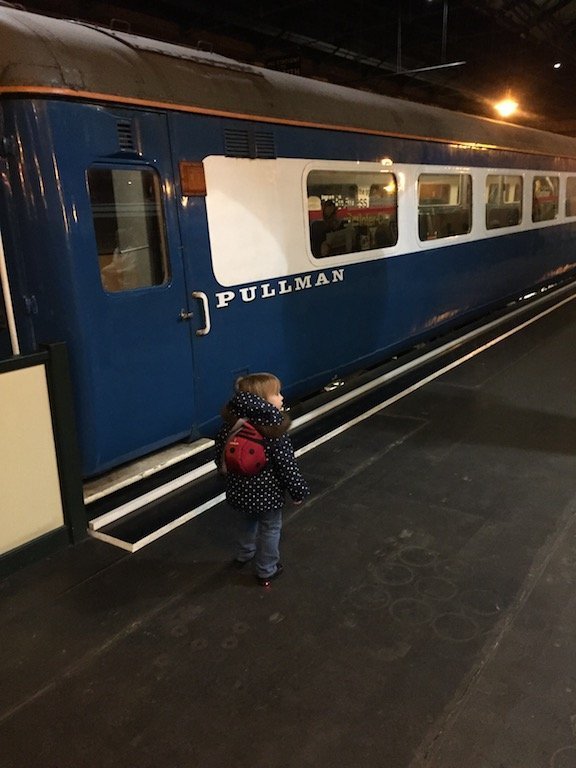 Elizabeth loved the fact that you could see into and sometimes stand in the carriages and engines.

From Station Hall you can go out into South Yard, where you can sometimes pay for Steam Rides. There is also a miniature railway here, rides can be taken again at extra cost. And a picnic area.

The Great Hall is a huge space packed with some of the most astonishing railway artefacts and engines.

Mallard has to be one of the highlights of the whole museum. This Class A4 4-6-2 Pacific steam locomotive set a world steam train speed record which has never been beaten. In 1938 it reached 126mph. It is also the most beautiful engine, with streamlined shape and garter blue paint. 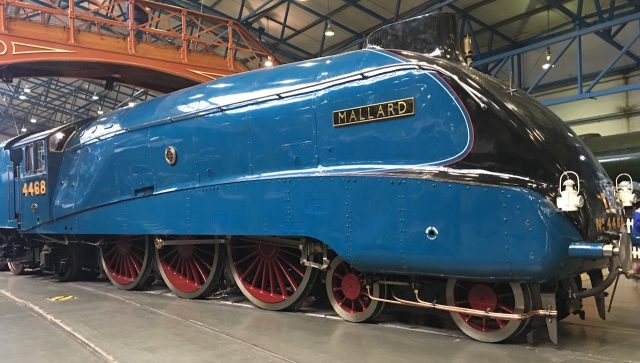 The Great Hall also houses a Japanese bullet train, with a small display showing how dapper the drivers uniforms are, and some examples of the bento boxes and other foods served on board. The carriage inside is much more akin to an aircraft than a train. The engine here at York is one of the original 0 class trains that could travel at high speeds of up to 137mph, but these trains were retired in 2008. Current Shinkansen trains are more likely to be reaching 200mph, and some can even go faster. 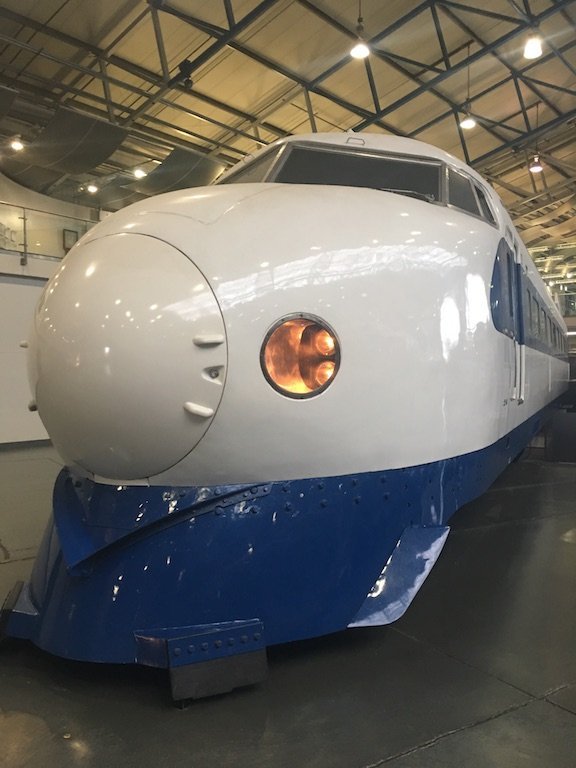 Perhaps quite fittingly, on the wall in the shadow of the Shinkansen is the cab section of a Class 43 power car, which was otherwise known as part of an Intercity 125, because of its top operational speed. Probably a lot of people walk past this without a second look, but to a child of the 70s, these were the best! 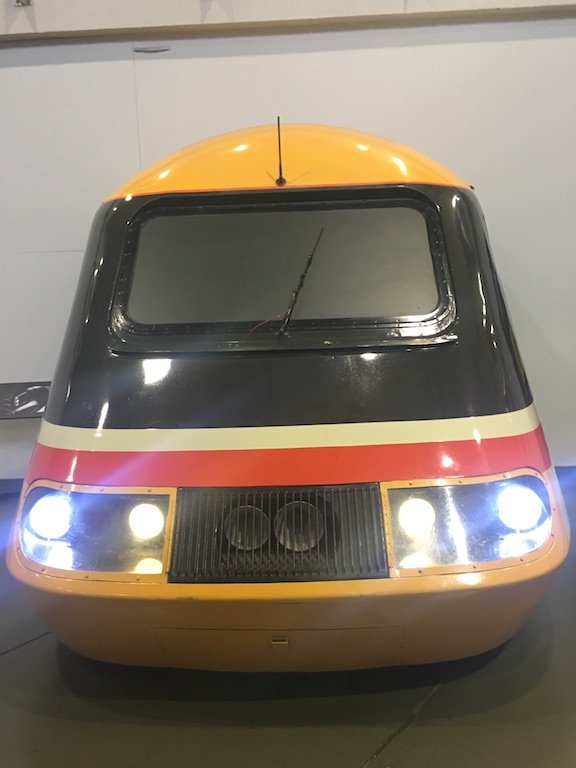 In 1829, trials were held by the Liverpool and Manchester Railway to find the best design to power a railway. The trials were won by Robert Stephenson with Rocket, an engine built in his works in Newcastle. Although it wasn’t the first steam engine, this was the one that set the benchmark and style for all that followed.

The real Rocket will be coming to the York Railway Museum at the end of 2019, but this replica was commissioned in 1979. Behind the rocket is a statue of George Stephenson, Robert’s father. George Stephenson is known as “The Father of Railways” because the standard gauge used on rail lines throughout the world is largely due to him. 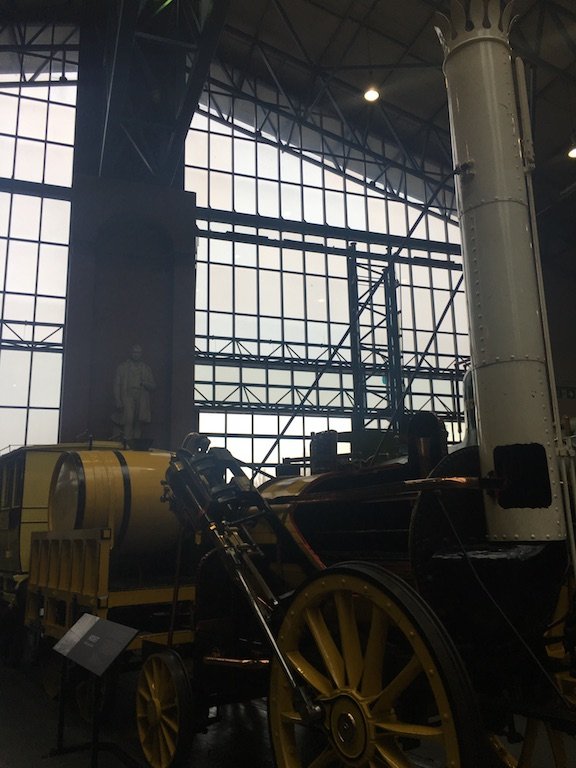 There is also a EuroStar engine, along with a cut away part of the tunnel that it travels through to get to mainland Europe. 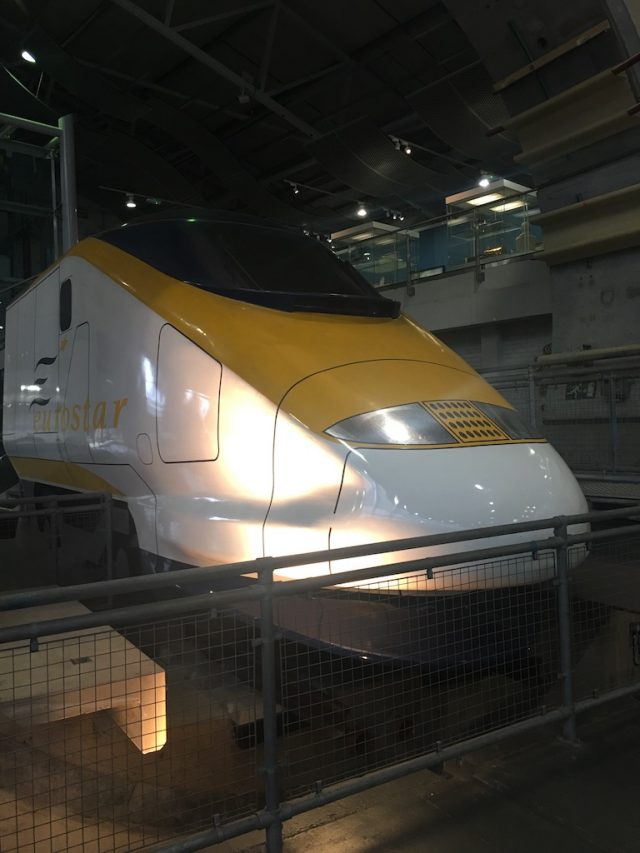 The rest of the Great Hall is packed with other locomotives, engines, carriages and exhibitions. Currently there is an exhibition marking the ambulance trains used in World War I. There is a fully working railway turntable. And a chance to see an enormous winding engine in action.

There is also a chance to walk underneath an engine! 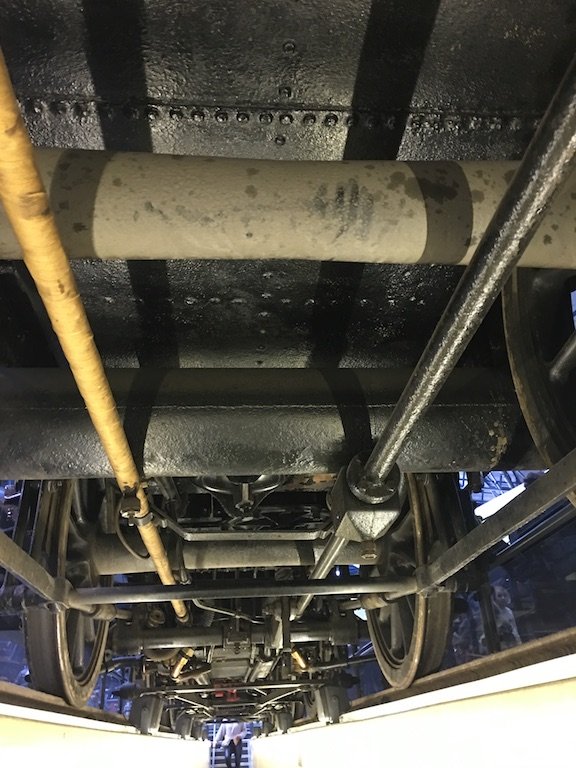 The last area in the museum is the North Shed. This houses about 10,000 fascinating objects from the railways. There us also a restoration section, a signalling school section showing how the signals operate the complex networks, and an exhibition about the Flying Scotsman. 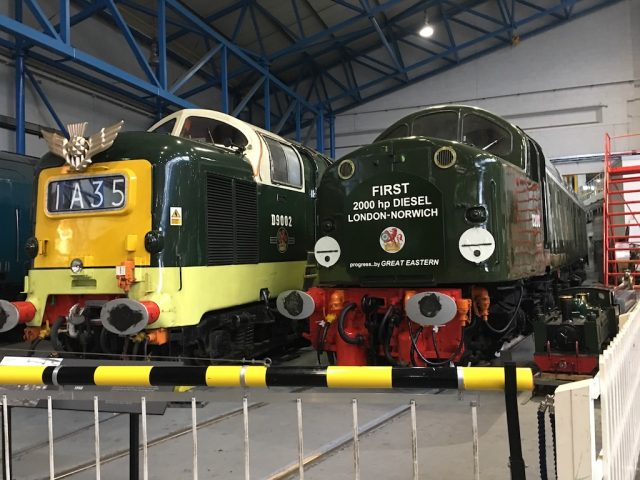 York Railway Museum is open from 10am to 5pm daily in winter, and 10am to 6pm in summer

The museum has plenty of toilets and baby changing facilities. There are picnic tables and also several places to eat, including a tea room in a restored railway carriage and an Edwardian-style restaurant. There are two shops full of railway souvenirs and gifts for enthusiasts of all ages.

During the day there are several opportunities to listen to talks and demonstrations. The information desks will be able to give more information as these vary day-to-day.

In the great hall there is a small children’s play area for younger visitors.

We spent approximately 2 and a half hours in the museum and our 3 year old loved running around the exhibits. For the true railway enthusiast and historian you could spend a whole day here. It is truly one of the gems of York. But for other ideas of what to do in York, see my other post here. Or for more free ideas of things to do in York, try this post.

Does a trip to York Railway Museum sound like a great day out to you? I’d love to know what your thoughts were if you have been. Let me know in the comments, or contact me on social media.

Love trains? Not far from York is Keighley, Bradford, where you can find the Keighley and Worth Valley Steam Railway.

Prefer trams? See what we though of the National Tram Museum at Crich Tramway Village in Derbyshire. 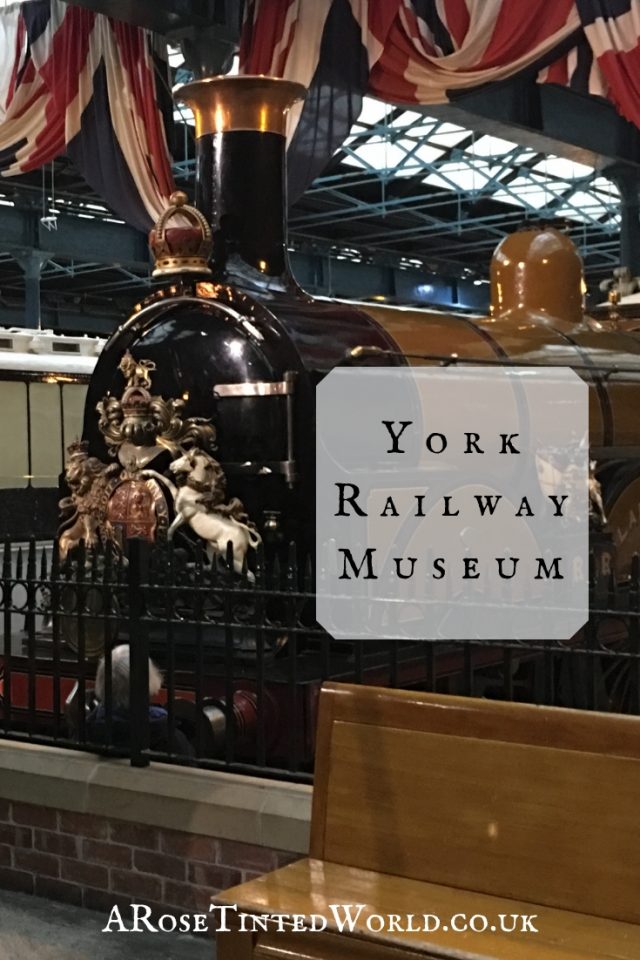 Enjoyed this? Why not read of our Trip To Sea Life Manchester?

or find other Days Out in Yorkshire With English Heritage

11 Replies to “A Trip To York Railway Museum”