We have been able to have a few days out this week as my gorgeous OH has been off school for half term. Today we took a trip to Sea Life Manchester. Here is what we thought.


A Trip to Sea Life Manchester 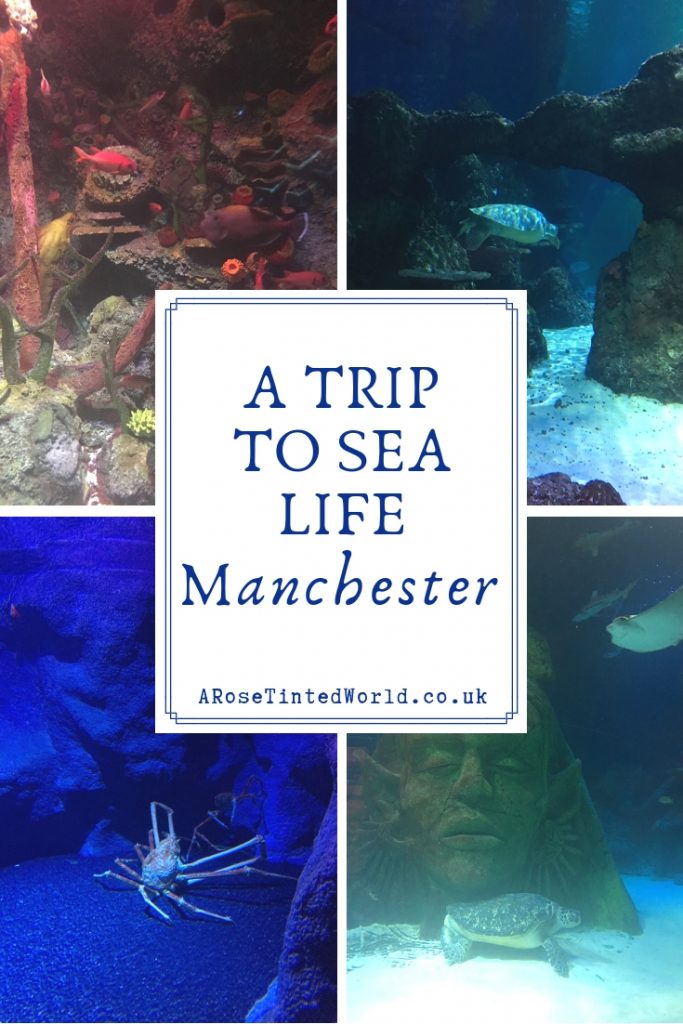 Sea Life Manchester is located at Barton Square, which is right next to the Trafford Centre in Manchester. Easily accessed by train and bus links, we chose to drive from Leeds by car.

The Trafford centre is about an hour away with good traffic. Just off the M60, there is ample parking. We arrived just after Sea Life opened at 10 am, and it is open until 6pm, though last admission is 5pm.

You can buy tickets online for a discount and there are lots of deals. Walk up ticket price at time of writing is £19.95 per adult. Children are £15.95, but Elizabeth was free as she is under 3. Be aware, there may be queues if you haven’t bought tickets online. But because we got there as soon as it opened there were none.

The journey around the centre starts like a lot of attractions do these days. You are let through in groups of about 20 or so into an initial holding section, where they have some screens telling you what you may see on your visit.

You can choose whether or not to have a group photo taken (so they can then sell you these photos later on the tour!). Actually the family behind us declined to have a group shot, and it wasn’t a problem. When the father of the group was asked by one of the children why they couldn’t have a photo he stated that he was a vampire and couldn’t have his photo taken. Nice one Dad! (Stored for future use.)

Then your group is taken into the next holding section where they did a very clever hologram projection piece on how turtles hatch and find their way around the oceans. It was really well done, and even kept Elizabeth’s toddler attention span.

The reason for both holding sections is that you are then released into the attraction proper, and by keeping each release to 20 people or so every 5 minutes it prevents too many bottlenecks and too many people cramming to see each tank.

The tanks are really beautiful, and there are lots of nooks and crannies for little people to almost get inside the tanks. In fact, there are several proper mini tunnels where children can get under and see the tank from the inside. 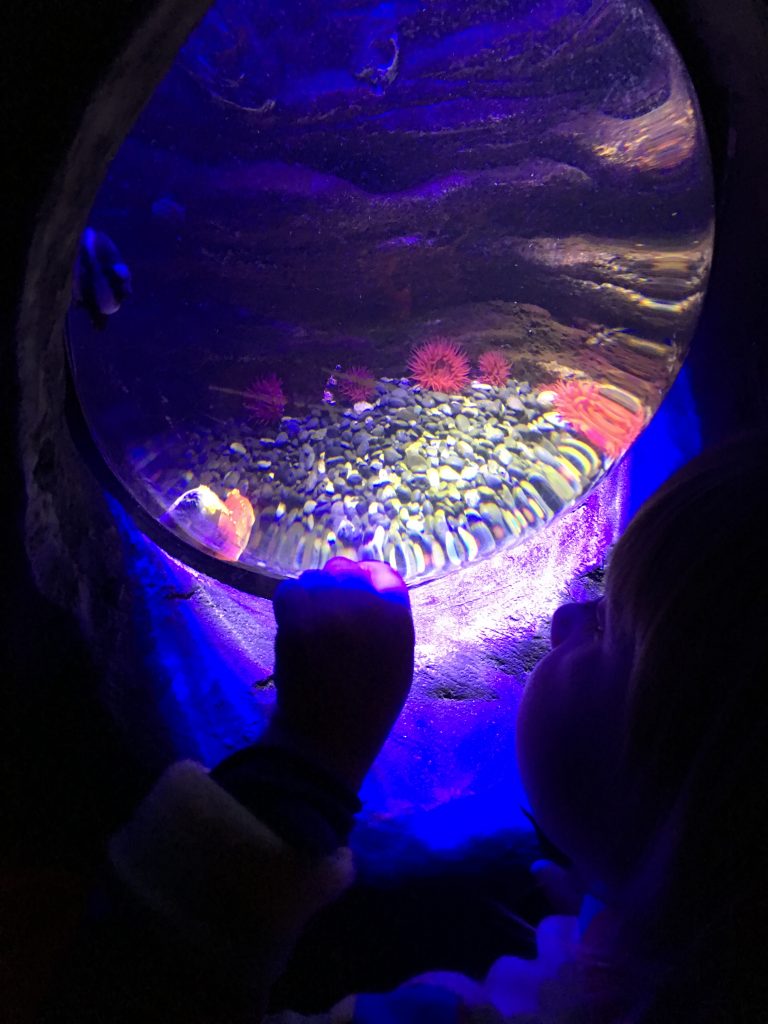 The exhibits are really amazing. We saw

and so many more. There was a larger tunnel to walk through, where the sharks and turtles drifted just above you, smaller tanks with clown fish (Nemo fish) and even a touching pool where we got to stroke a starfish.

One of the fish made me chuckle. Not the prettiest of fish, but it has the best name. I’m definitely adding that to my list of go-to insults this week!. 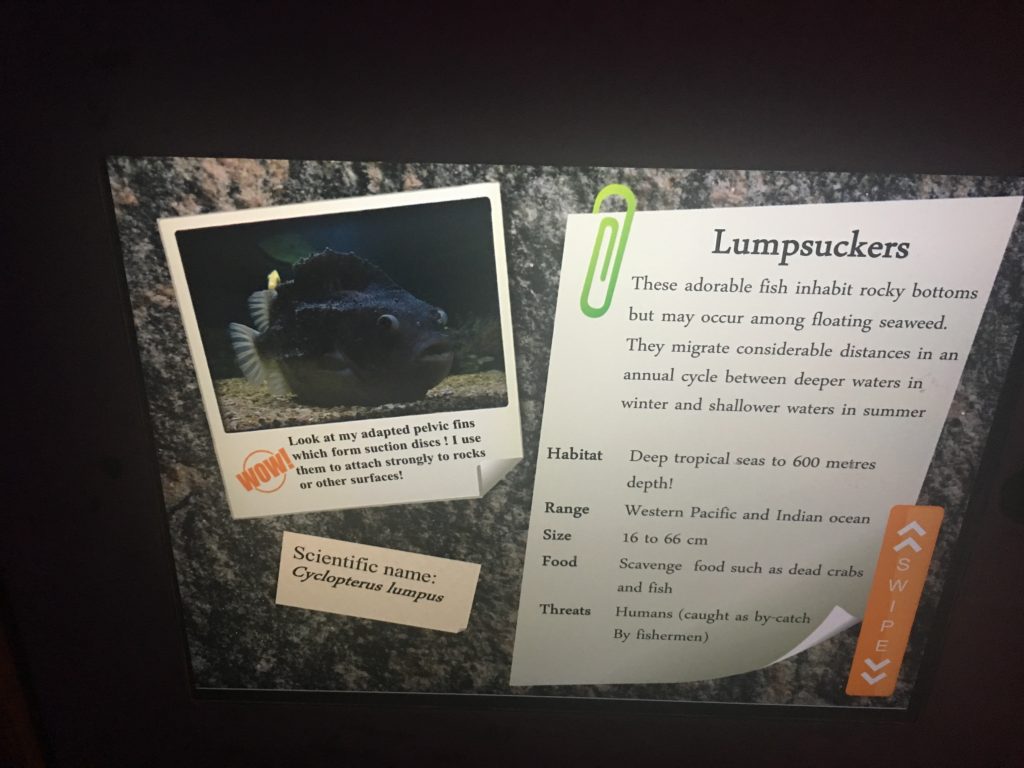 Finally the last tank in the exhibit is the giant spider crabs. These are massive crabs that really do look like spiders with incredibly long legs. Anyone who has ever seen ‘Starship Troopers’ would be pretty afraid of these!

And, you go through a gate into the gift shop. As responsible parents of a 3 year old, we picked up our daughter at this point before she attached herself to any stuffed toy. It’s harsh but it keeps our child from adding to the ever increasing mound of fake animals.

How long did we spend there?

All in all it took us about 70 minutes to walk around the centre. Though we didn’t spend any time in the soft play area in the middle of the tour, as that was quite busy.

We also rushed through the special events that were going on for Halloween. They have a Sea Witch Treasure Hunt as a special attraction at the moment. You have to look for 5 things in the tanks that the sea witch needs. Elizabeth didn’t want to meet the Sea Witch (although she looked very friendly to be fair!) and a helper got her some treasure for doing the hunt. There were also some singing pumpkins (very akin to the singing busts of Disney’s Haunted Mansion). Elizabeth declared that she now doesn’t like pumpkins! Good job there isn’t a big holiday coming up that features pumpkins heavily….oh damn!

We actually thought that almost £20 each as an adult admission is a bit steep for spending just over an hour. But in fairness there is a lot to see, and Elizabeth just isn’t old enough to spend time reading. I am sure that you could spend a lot more time with an older child really discussing each tank.

The centre is actually a really lovely place, and there is a lot of scope for learning and interaction. The tanks are all very clear. There is a lot of brilliant conservation information. And although there was a queue and it was half term, it wasn’t too busy.

So, thinking of A Trip to Sea Life Manchester, or their other locations around the globe? We would definitely recommend a visit. But maybe try and get an online deal before you go.

We weren’t paid or given free entry for this review, this is our honest opinion of the attraction.

And yes, I bought the photos!

Enjoyed this? Why not read about the fact that You Only Get 18 Summers – whats on your wishlist?

or read about how you cope When a Toddler has a Broken Leg!

50 Replies to “A Trip To Sea Life Manchester”