We have been waiting for our daughter to have a child’s tonsillectomy for the last 18 months.

If you read my post on my little girl’s sleep apnoea , her tonsils and adenoids were causing us some real worry. So we were very pleased when we received a call on the Friday after I published that post to say that there was a cancellation and could we come in on the Monday for her adenotonsillectomy? 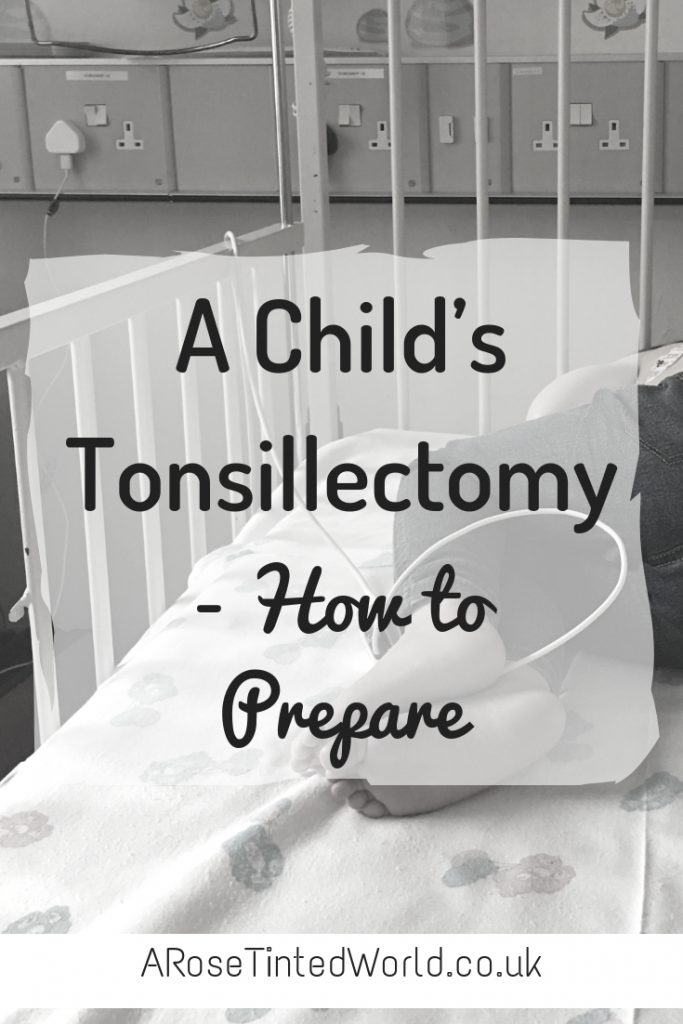 A Child’s Tonsillectomy – How to Prepare

The hospital emailed through the admission letter as there wasn’t time to it to get to us in the post. It all became very real for me. My anxiety was high about putting Elizabeth through surgery. Though I knew a child’s tonsillectomy should improve her condition, I never think that surgery should be taken lightly. I was worried. But luckily I was spared some anxiety as was only a weekend to think about it rather than being stressed over it all for weeks.

Packing for the Hospital

We were informed that Elizabeth’s operation would involve an overnight stay in hospital due to her only being 2. We had been told that either Mum or Dad could stay overnight with Elizabeth after the operation. Between us we agreed that it should be me. Andrew was actually meant to be starting back to school again after the summer holidays on the day of surgery, so it made sense that I be the one sleep deprived.
We needed to pack an overnight bag. I do like to pack, but I tend to take everything but the kitchen sink!

For Elizabeth I packed:

For myself I packed:

I was totally prepared for a sleepless night. 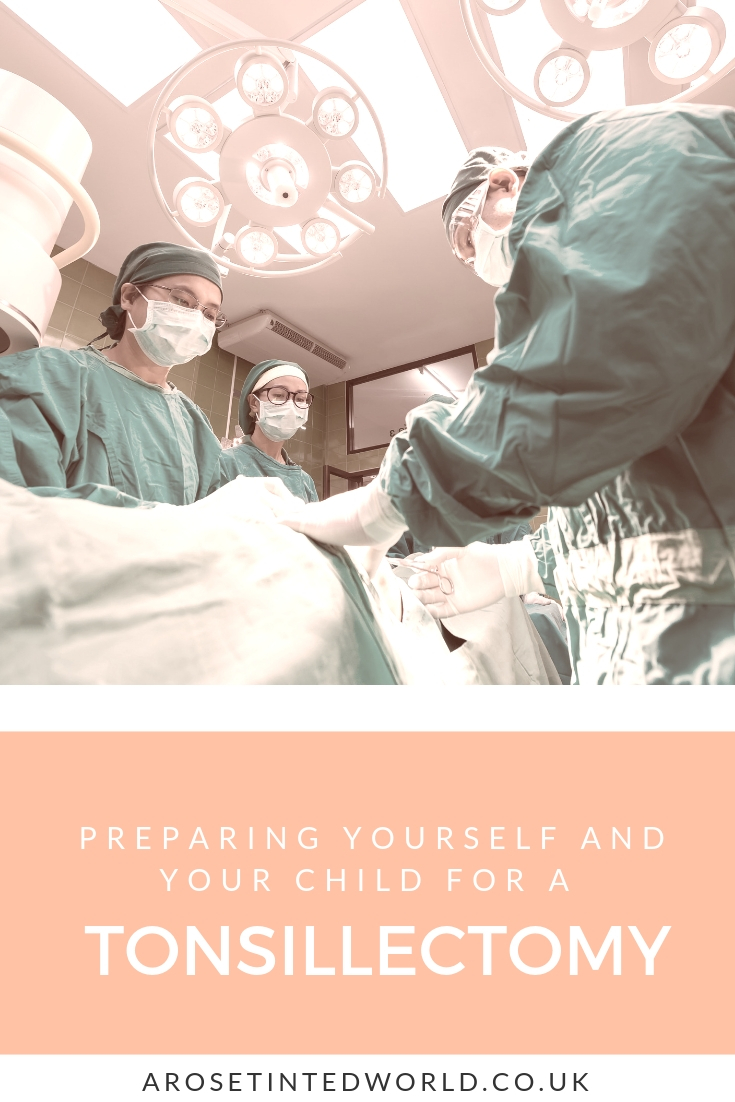 In addition to this, we bought some special food items in our weekly shopping for post surgery

We hoped that these things would help to sooth her throat and encourage her to eat even though she was feeling lousy.

We made sure we had plenty of Calpol (Paracetamol) and Ibuprofen painkillers in the house for after surgery. I even made a painkiller schedule.

The Day of the Surgery

The day arrived and I awoke very anxious. My stomach was churning and I felt a little sick. It reminded me of a day when I need to fly (I am a very nervous flyer) or the day that I took my finals at university.
I took her temperature, we had been told that if she had a temperature over 38 Celsius that they couldn’t do surgery. She was fine.
We had been told that as her surgery was in the afternoon that she could have breakfast before 7.30 then nothing else to eat until after her operation. We have never had such a quick breakfast, I was worried that she’d not eaten much, she usually makes breakfast last for ages, but I had to clear up today.
Have you ever tried telling a toddler that they aren’t allowed food?! My little girl has a tendency to just go to the cupboards and get food when she wants it. She was asking for cucumber and milk by 9am! Luckily, we had put cupboard locks on all the food doors in the kitchen and even put a lock on the fridge. Twarted, she resigned herself to complaining at me…
She was allowed water until 11am. Then nothing more.
Surreptitiously I packed a coolbag where Elizabeth couldn’t find it containing food for us, food for Elizabeth for afterwards, milk for after surgery and her favourite hulk cup/bottle.

We arrived at the hospital for noon.

They assessed Elizabeth’s weight, height, blood oxygen levels, pulse rate, and temperature.They asked questions about her medical history and possible allergies. We were seen by the anaesthetist, nurse and surgeon. We were given a lot of information, but a lot of it we had received before in the form of leaflets about a child’s tonsillectomy and adenoidectomy.
So it was time for a long long wait with lots of toys and games in the waiting room to amuse her.
After a couple of hours, a nurse came to put some ‘magic’ cream on the back of her hands. This was to numb the area a little so that they could inject there before the anaesthetic.
Finally our turn was called to go to the theatre. Elizabeth went down to theatre at 3.30pm with Andrew. I felt like I was handing over the most precious thing in my world to the care of others.
We sat and waited in a small room with other anxious looking parents.

We were both called back in to the recovery room at about 4.15pm. Elizabeth was on a monitor and still coming round fully. She was very upset and drowsy. The surgeon came over to tell us that the tonsillectomy had gone well. Her adenoids had been massive, taking up most of the space at the back of her nose and top of her throat, so it was no wonder that she had had an apnoea issue.

Elizabeth had a slight nose bleed which apparently is normal. And she needed lots of cuddles. She managed to drink a little bit of milk and water and then she fell asleep for 2 hours. Morphine was given after the surgery to help with the initial pain, so this is why she was so sleepy!
She had missed the dinner trolley when she awoke, but there was a kitchen on the ward where you could ask the nurses for toast and sandwiches all night .

The first night was very broken.  The stress of the day meant that our usual routine was out of the window.
We watched one of the films on the iPad until about 9 o’clock, which is so much later than her usual bedtime. But it was a lovely mummy/daughter evening. Elizabeth enjoyed her crisps and food treats. She was even ok when we woke her for painkillers at 11.30pm. The only thing she hated was the monitor being stuck to her finger, but the nurse insisted that she kept it on to monitor her heart rate and oxygen levels. 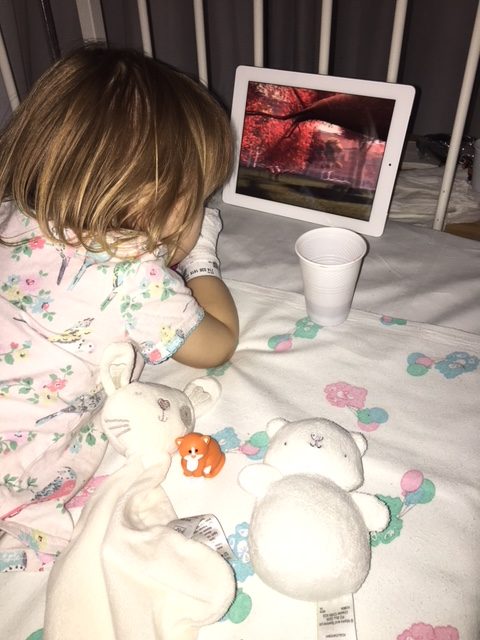 I had been given a really quite substantial camp bed to sleep on, and got into my pyjamas. Just as I was nodding off, a nurse returned, the alarm had gone off at the nurse station! She placed an oxygen mask very close to Elizabeth’s face as she slept, as her oxygen levels had dropped to 92. I watched as her oxygen levels rose back up to steady out at 97-98. 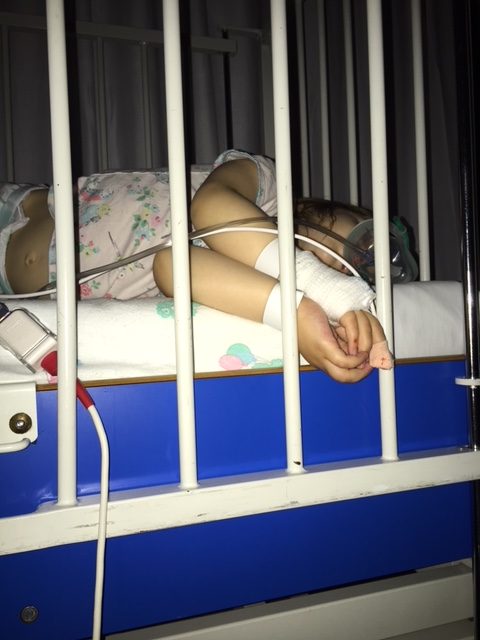 Hospitals are really not good for restful sleep! Some of the other poor children on the ward were obviously not having good nights, and in turn the silence was broken by crying, then anxious mums shushing whilst trying to comfort their children the best they could.
The nurses have to come round to do observations on the patients, and as quiet as they are they still woke me up. Then at 4am Elizabeth was woken up to be given more medicine. She refused to take it, spitting it all out. We both ended up a sticky and bothered mess!
Elizabeth went back to sleep. I didn’t.

At 6.30 am Andrew came from home, he had brought one of her bottles so that we could try medicine in milk for her. Even though we had been told that straws and sucking on a bottle was bad for the operation site, it seemed to be the only way of getting her to take medicine. She managed to drink some milk with painkillers, and quickly brightened up.

We were discharged once they were happy she had eaten and drunk some liquids. When we got home Andrew really did have to leave to go to school. Elizabeth and I watched some films and tried to relax a little. I encouraged her to sleep (mainly so I could sleep myself admittedly!) but she also seemed tired, so put up no resistance.
However, when we woke up she refused her painkillers. Just straight refused.
Here are some tips on how we got her to take her medicine.

My Main Tips for Preparing for a Child’s Tonsillectomy

Did the surgery work? See this post for how we all felt 6 months on…

I hope that this post has helped you prepare for a child’s tonsillectomy. I would love to hear your comments, do leave them below. Or contact me on social media. 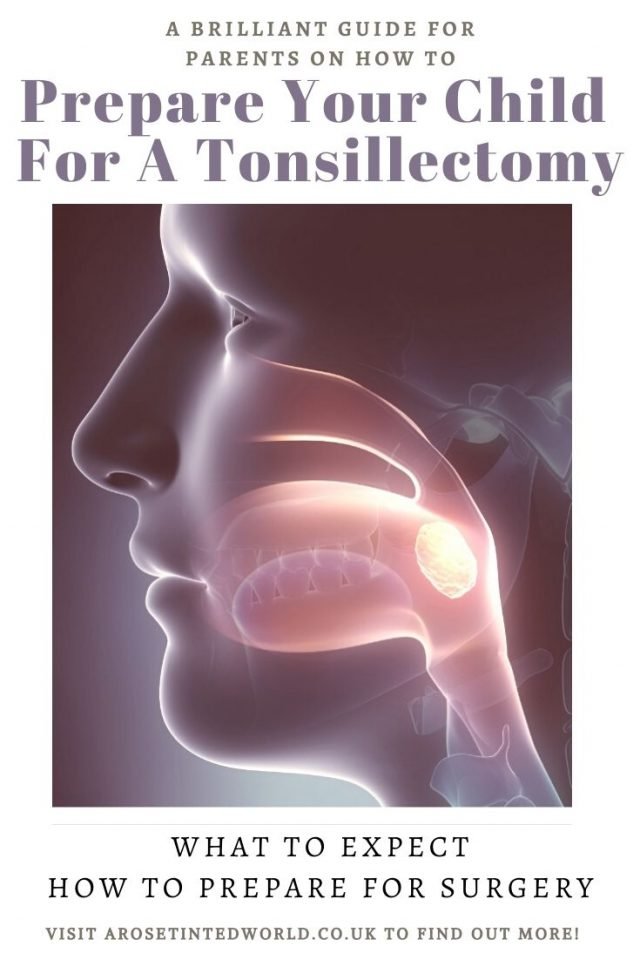 35 Replies to “A Child’s Tonsillectomy – How to Prepare”