By the age of 1, our little girl had suffered with over 3 bouts of tonsilitis and had needed antibiotics on several occasions. We started to notice that she had a very loud snore when she slept, and nursery had commented on this several times. She was always very congested, and had a constantly runny nose. But more worrying was her breathing patterns in her sleep. She tended to stop breathing for periods of up to 20 seconds, then snort and breath in through her mouth before resuming breathing again. We took her to our GP, who told us that we had a child with sleep apnoea.

A Child with Sleep Apnoea 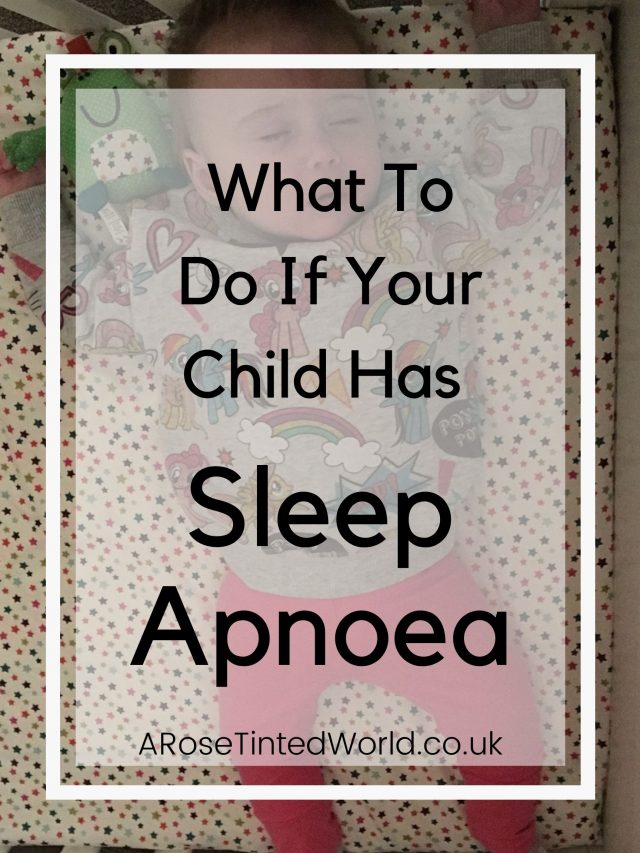 Sleep apnoea is a sleeping disorder where a person suffers from breathing being interrupted during sleep. This interrupted breathing can occur hundreds of times in an average night. The sufferer can stop breathing for a number of seconds at a time. So consequently this can lead to problems if the body and brain are not getting the oxygen they need.

How We First Noticed Elizabeth Had Problems

We first noticed Elizabeth’s breathing when she started nursery at 9 months. Children are always likely to pick up all the new bugs and viruses when they are in closer proximity to others. So we weren’t surprised when she ended up with one cold virus after another. Winter always tends to be worse for coughs and colds, as the central heating gets switched on and children play more indoors.

However, as parents we really weren’t so prepared for the extra sleepless nights. She seemed to be waking up more and more in the night. Her sleep seemed very disturbed due to her breathing patterns. When she did have a cold we all went through several really bad nights. My partner and myself ended up having a shift rota for staying awake next to her on the worst nights. We slept on the floor next to her cot in her nursery or used the travel cot mattress, often having very sleepless nights. And it was incredibly stressful, I worried constantly over her health and sleep patterns. We were all exhausted.

How Did Elizabeth Get Diagnosed?

Elizabeth herself was also really suffering. She tended to be more irritable. And her eating was affected, when she was blocked up she refused food and just wanted milk.

I recorded videos of some of the episodes on my phone, and decided to take Elizabeth to see our doctor. When Elizabeth was just over a year old our GP referred us to our local hospital Paediatric Ear Nose and Throat clinic. But he did warn us that there would be a 3 month wait to see a consultant.

But then it all came to a head when Elizabeth was 14 months old. She had a particularly bad cold and her nose was really blocked. Saline nose flushes really weren’t working (and were quite frankly impossible to do!). After a particularly bad few nights of disturbed sleep and poor breathing, we felt she was really struggling. We called the emergency doctors and were seen at the children’s department of the local hospital.

Elizabeth really was finding it hard to breath. Her chest was really pulling in when she tried to inhale, and she seemed to be wheezing badly. Furthermore, on examination, her blood oxygen saturation levels were down to 92%.

And so she was admitted into a ward.

We spent 5 nights in the hospital while they did sleep studies and kept her under observation. One of us was allowed to stay overnight each night thank goodness. It was an experience that I would not want to repeat in a hurry.

But at the end of the 5 nights they just told us that she was too young to treat!

We went to see a Paediatric ENT consultant, who told us that they rarely operate before 3 years of age or 15kg weight. Too many complications can occur and there can be too much blood loss in children smaller than this. So we would have to wait. Plus things can sometimes improve spontaneously. We were put on a 6 month review, and just had to keep pushing through the winter of sleepless nights and worry.

Over the summer things did improve. Less cold viruses and the warmer weather translated to better breathing.

However, once the second autumn had started the symptoms returned. Elizabeth started waking again several times a night, and being irritable during the day. She took longer to settle on a night and often kept getting up.

See some tips for if your child will not settle.

On the worst days she didn’t want much food. I was starting to worry if her apnoea at night could be affecting her physically. Or affecting her speech and hearing as she was always so full of nasal congestion. She regularly breathed heavily through her mouth, and constantly had a runny nose. Even friends commented on how her breathing appeared a bit strange. even when she was awake and playing.

On a night, I was constantly attached to the baby monitor. There was no way I was giving it up! More sleepless nights and sleeping next to the cot bed.

And here is another tale of why a baby monitor is so important.

After a second and third visit to the consultant for reviews, we were finally told that Elizabeth would be put on the waiting list for an Adenotonsillectomy. This is where they remove both the adenoids and the tonsils.  We were told that Elizabeth’s tonsils had become really enlarged. This is why she was always so nasal and congested.

Again we were told that we had a wait – of 36 weeks in our area. But this put her at just under 3 years of age, which is the threshold for the operation.

How Did I Feel About An Operation?

No elective operation is without risk. A general anaesthetic, whilst being relatively safe in young healthy people always carries a risk. So I cannot say that I was totally happy that Elizabeth would need an operation at such a young age.

But whilst the prospect of an operation on my daughter did scare me, I just wanted to go ahead. It surely could only help her breathing? And this in turn would surely help her to sleep better?

Finally I just hoped that it may help her to be less irritable and improve her energy levels through being less tired. 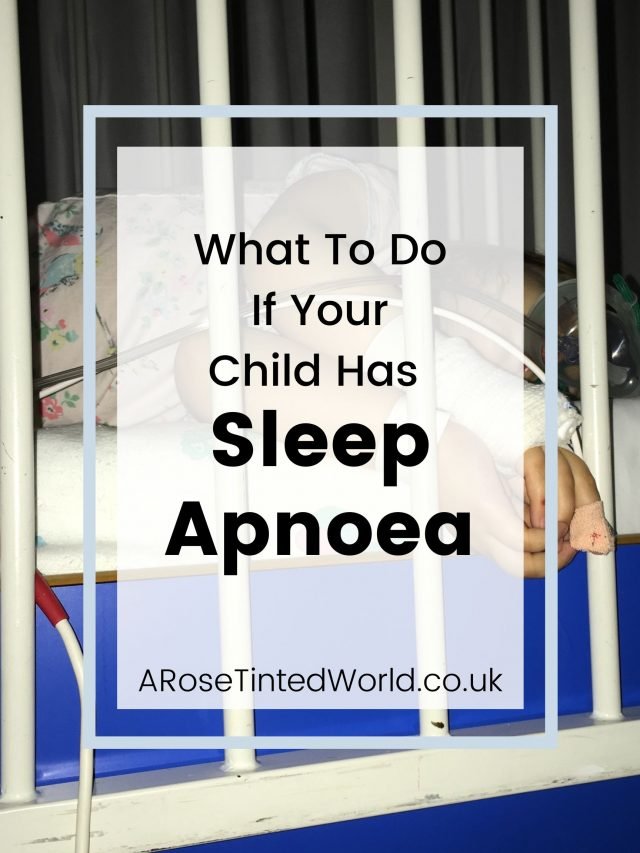 What is Sleep Apnoea?

Sleep apnoea can happen in adults, and it is what most people will think of if you talk about the condition. In adults it tends to happen if a person is overweight, have an over large tongue or small jaw. It can lead to heart problems, depression, daytime tiredness and headaches. It can even be fatal if left untreated.

There are actually 2 types of sleep apnoea.

Elizabeth definitely had the obstructive type due to having enlarged tonsils and adenoids.

What are the Symptoms of a Child with Sleep Apnoea?

In a child with sleep apnoea, weight can be a factor but it doesn’t have to be. It can also (as in our case) be due to having too much adenoidal and tonsillar tissue at the back of the nose and throat. Symptoms are

Delayed growth and heart problems may also be associated with child sleep apnoea. I was always concerned that there was a real risk of Elizabeth just stopping breathing in her sleep. But I am generally a very worried mum, its just how I am. The consultants always firmly stated that she would not stop breathing, but I was not reassured.

So – Do You Have a Child With Sleep Apnoea? Here Are My Tips To Manage It.

These would be my tips.

I did want to share our story to raise awareness of this condition.

I hope that this has helped you decide your next move if you do have a child with sleep apnoea. Do let me know if you have anything further to add by commenting below, or follow our story on social media.

Want to see how surgery went? See how she (and we) coped with having surgery to remove her adenoids and tonsils

Want to see how it all turned out? Read The Benefits of a Tonsillectomy 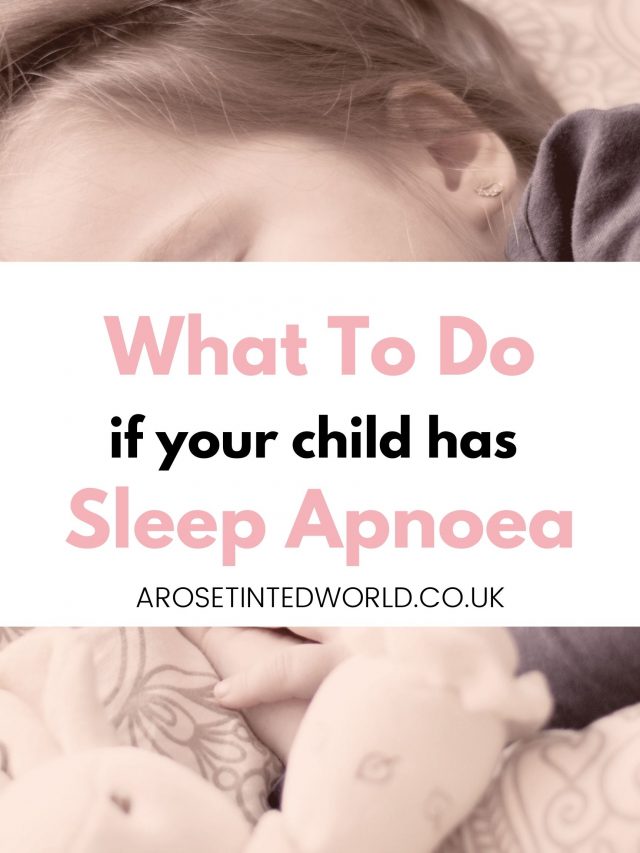 46 Replies to “A Child With Sleep Apnoea”