Happy 3rd of December! And welcome back to my Rose Tinted Advent Calendar. This year I’m going to try and get you into the spirit of the festive season by sharing some of our advent activities. Maybe you could try a few? 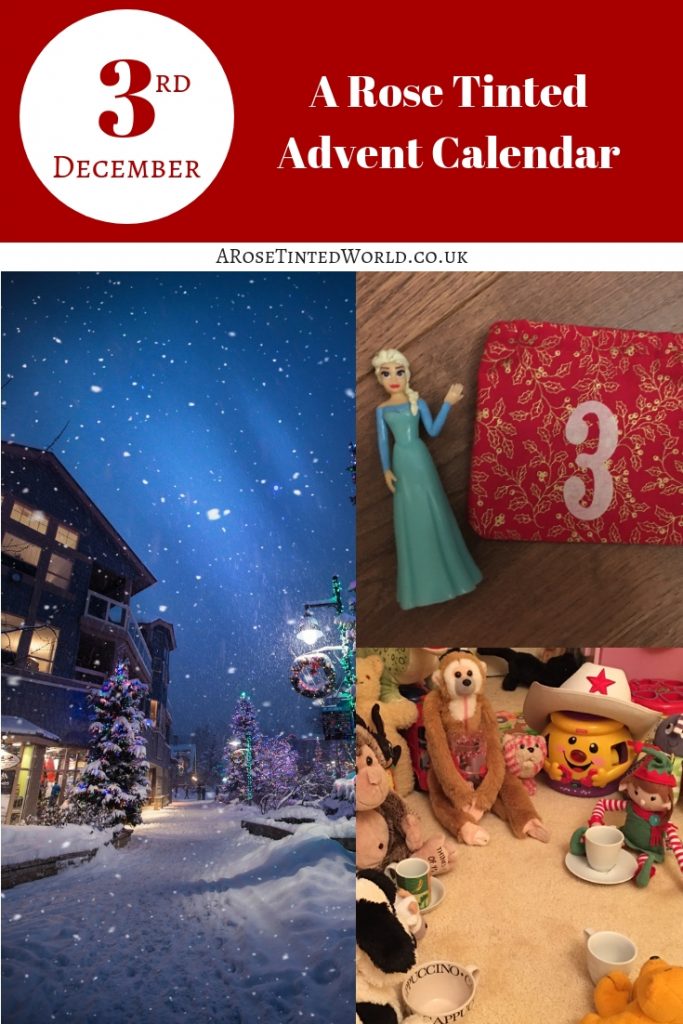 Where is the Elf? 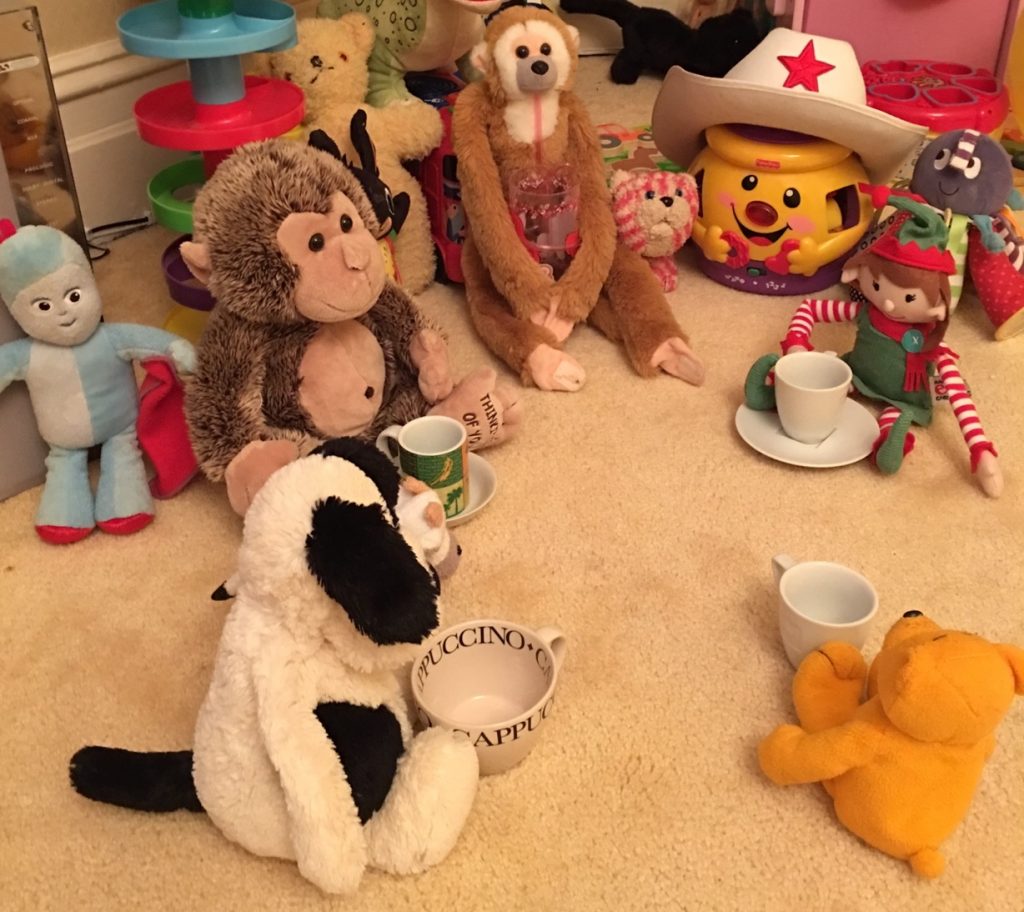 Today we came downstairs to discover that the elf was having a tea party with some of Elizabeth’s toys. The elf and Gary Gorilla were having double espresso, Bob (the dog) was having a frappochappomochalattegingerbreadchino, and monkey had a soft drink (he doesn’t touch caffeine).

The Advent bag for the 3rd of December had a mini Elsa from the film “Frozen” – this was Elizabeth’s first real favourite film. 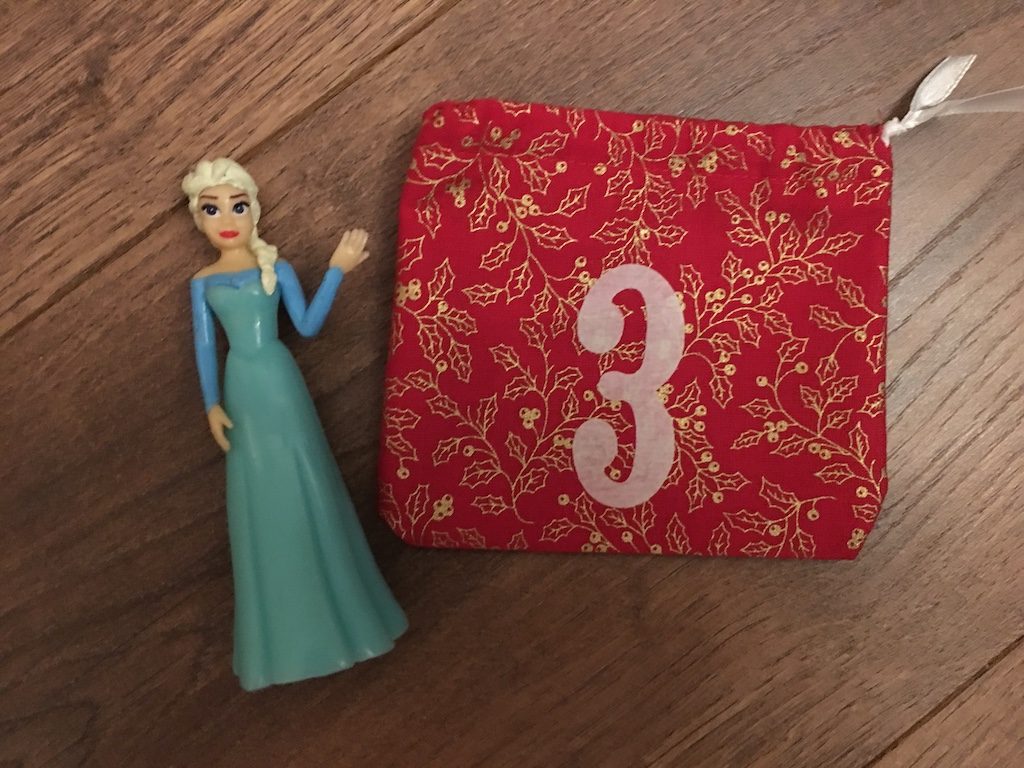 Which got me thinking about my favourite Christmas films for children. Sorry not sorry, Frozen is not in there, as it’s not really Christmas is it?

My 5 Favourite Christmas Films for Children

This always tops my list. I’m not a McCauley Culkin fan, but the film has such brilliant slapstick and fun that it never fails to raise a laugh.

Kevin and his very large family are going away for Christmas. Except on the day they all wake up late, and Kevin is left behind by mistake. All is good until a couple of crooks decide to try to burgle his house!

The glint of a gold tooth, the imprint of an iron on the face one of the villains, and… “Keep the change you filthy animal”!

Anything Muppets based is brilliant for children, but this takes Christmas to a new level. The reimagining of the Dickens classic by the Muppets is just a joy. And casting Michael Caine as Scrooge was a genius move.

Ebenezer Scrooge is a miserable and miserly man, determined to make everyone else as unhappy as himself. He has forgotten what it is to be happy. But when he is visited by the ghosts of Christmas and his ex partner in business, he gets a different view of the world.

Some great songs, and above all the true meaning of Christmas. Be kind to one another.

My third choice is the 1994 remake of another classic Christmas film, starring the late Richard Attenborough, and Mara Wilson (of Mrs Doubtfire and Matilda fame).

Mara plays Susan, a little girl whose mother works at the famous Cole’s department store. When their regular Santa Claus employee is fired for being drunk at the Thanksgiving parade, a mysterious old man called Kris Kringle takes his place, and is hired by the store.

When Kris Kringle enchants customers and rockets sales at Cole’s, a rival department store decides to frame Kris as being violent. Kris insists that he cannot be violent or in jail, he needs to be released as he is Santa Claus. His defence rides on the question, “Do You Believe?”

The Polar Express is an animated tale of a small boy who also has almost stopped believing in Santa. On Christmas Eve, a magical train appears outside his window. He goes on a journey, both physically and emotionally, finding out about friendship, kindness and magic.

The guard of the train is voiced by non other than Tom Hanks – and he also bears an amazing resemblance.

Great characters, a brilliant message, and the best rollercoaster ride ever!

Finally in my top 5 Christmas films for children I have this Will Ferrell classic. Buddy the Elf finds out that he is not really one of Santa’s true helpers, but a human.

He goes to meet his real father in New York, and tries to give him some of the true Christmas spirit. But his father has lost the true meaning of Christmas, like a lot of people in the world.

Santa’s sleigh won’t work unless people feel the true joy at Christmas. Can Buddy find enough Christmas spirit to help get Santa’s sleigh back in the air?

Music of the Day

Today’s music is from one of the above top 5 films. A lovely song from Josh Groban. This is ‘Believe’ from The Polar Express.

I hope that you are having a wonderful 3rd of December? What are your favourite films at Christmas for children? Let me know in the comments or tell me on my social media! See you tomorrow!

Enjoyed this? Why not read my other advent stories from 1st of December and 2nd of December

21 Replies to “3rd of December – A Rose Tinted Advent Calendar”